Time to travel to the only state left unvisited, South Australia. 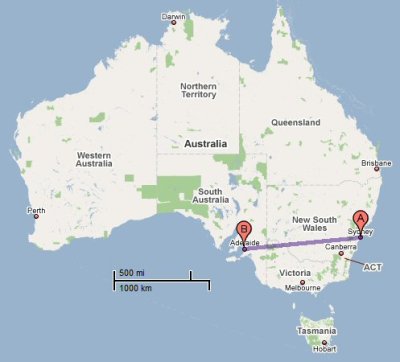 South Australia is the fourth largest state (it is 1.5x larger than Texas), but only has 1.6 million people. In typical Australian fashion, the majority of the people live in a single city, Adelaide, which boasts a population of 1.1 million. Residents of Adelaide proudly claim that their colony was the only freely settled colony in Australia (no imported penal workers). Adelaide was a planned capital city, situated in the middle of the southern coast and near a river. Adelaide is known for its food, wine, festivals, and sporting events. We happened to arrive during Festival (a huge carnival filled with shows, food, and alcohol) and on the weekend of a V8 race (their version of NASCAR). It was unbelievable the number of people present in the city.

We arrived late in the afternoon, checked into the hostel, and set out to explore the city. Adelaide has nice wide streets and tons of shops. Walking the main strip, I was very impressed with the modern feel of the city and the cool looking buildings. One building was covered in white panels that would light up different colors to create a kaleidoscope of images. Cafes, restaurants, pubs, and clubs lined the streets, and people were spilling out of all of them. The road turned into a wide pedestrian walkway, and musicians played every 30 yards. Dawn even stopped to admire some of the artwork. 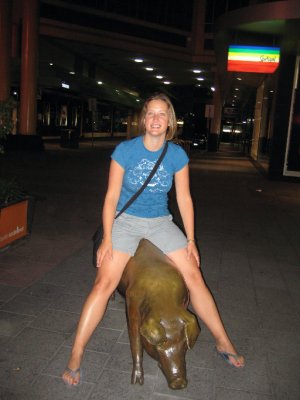 We walked the entire strip and came up to the Festival. It slightly resembled a state fair, except there were no rides and no games. Instead, there were tents advertising shows of all kinds. All forms of dancing, singing, and performing could be found. Unfortunately tickets for the events sell out quickly, and we arrived on a Saturday night. Instead we made the most of the event by picking up delicious food (a fresh-toppings pizza and hot fried donuts). The vendors also tried creative ways for you to stop at their booths for drinks. Once person had a double-decker bus that had been converted into a bar. Wine vendors poured very full glasses and would give you advice on which glass to order. In my opinion, it was the perfect carnival. 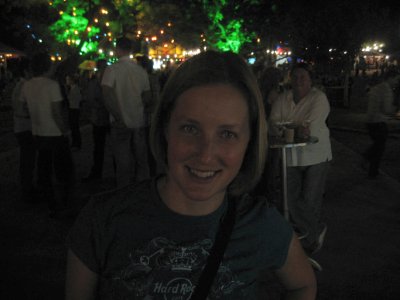 We left Festival towards closing time and made our way back down towards some of the bars. It was shoulder to shoulder trying to make it down the street. Every bar and cafe was packed. We gave up on the idea of fighting our way up to a bar and decided to make our way back to the hostel, until we ran into giant robots. 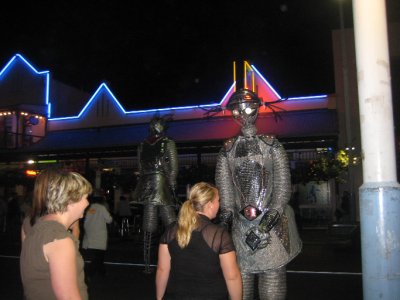 We made it back to the hostel and got some rest. We were waking up early to do another wine tour.

The Barossa Valley is one of the most famous areas for Australia wine. Shiraz is the most popular grape grown in the region, as the middle-eastern derived vine fits well into the dry climate near Adelaide. Driving out to the valley, we passed by a giant tree that used to house a family! 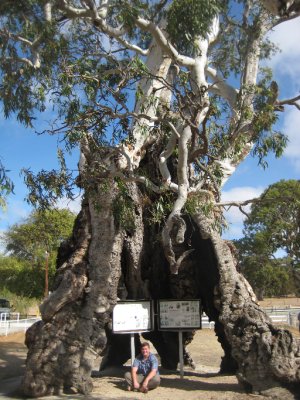 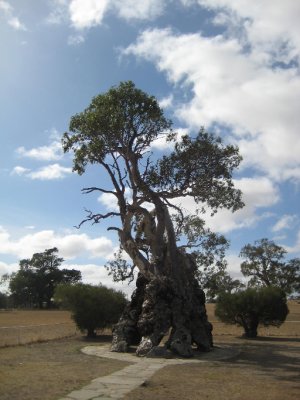 A married couple were too poor to live in a house, so they moved to the outskirts of town and stumbled upon this tree. They actually had 2 children while living here, and went on to have 8 total.

We made one more stop before reaching the first wine tasting at a toy shop. Australian tourist stops are often centered around ridiculously large items, like the Big Pineapple or Giant Guitar (there are over 150 such items around Australia), but we were lucky enough to get to see the Giant Rocking Horse. 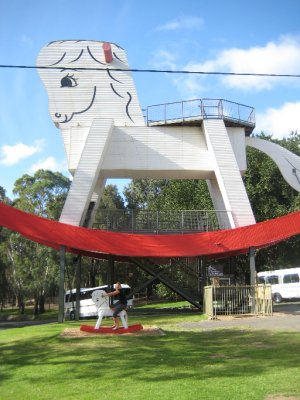 We went to a couple different wineries, and the wine was excellent as expected. After getting slightly tipsy, I got grilled by two Swedes about American politics. Thankfully the conversation moved towards European Union politics as a British man began filling me in on how the EU operated. After lunch we went up to a lookout to view the Barossa Valley. It was a beautiful day, and the valley provided magnificent views. 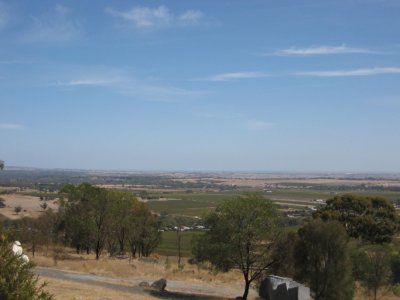 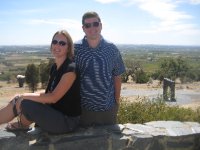 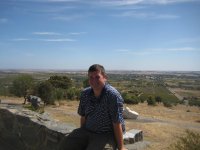 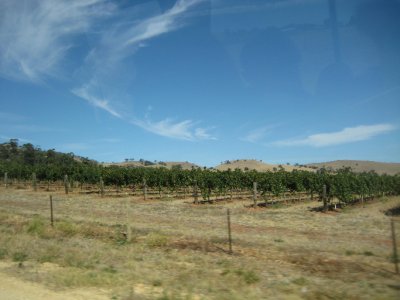 After hitting up another couple wineries (and $150 in purchased wine later) we started making our way back to Adelaide. We went out for another night on the town and saw some very interesting people. I had wanted to go to a bar called the Stag Hotel, but it was overrun by drunken V8 fans. The race had ended, and the NASCAR-esque fans were everywhere (and every bit as redneck as typical NASCAR fans). We slowly made our way back to the hostel, keeping a safe distance from the rowdy and sunburnt crowd. Dawn and I rented a true Australian Movie, Two Hands, which was Heath Ledgers first starring role. It was pretty cool seeing a movie shot in Sydney after living there. Dawn was going on another tour tomorrow, so we both called it a night.

The next day I walked down to my office, the McDonalds, and had a productive work day. During the day I took a break and sat out in the sun along the river behind the Parliament House watching the swans and ducks swim lazily. Adelaide had really grown on me during my short stay, and would be a top choice if I had to pick one city to live in for an extended period.

It is another beautiful day, so we decided to head up to the Hunter Valley to sample some Australian wine. 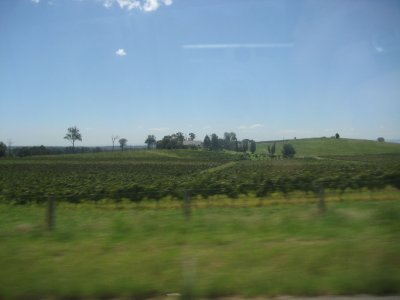 The Hunter Valley is about a 2 hour drive north of Sydney. The river valley contains ample water and the cooler climate provides a great environment for grape vines. Red grape vines dominate the hills (they do better in the drier weather), but white grape vines are also abundant. Over 100 wineries are located in the area, some family-owned wineries having surviving 5 and 6 generations. At 10:30am we arrived at the first winery, time for the drinking to begin! 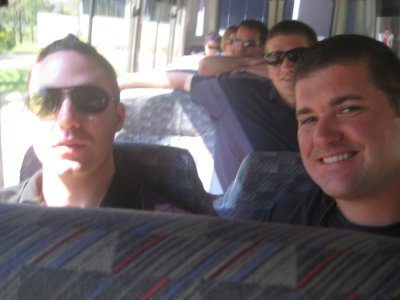 Our tour group only had 9 people, so we were a pretty intimate group (especially when 5 of us already knew each other). We started off in true fashion, as the first winery had 9 bottles for us to sample. One of the nice things about doing wine tasting is that you are free to try wines you normally don't drink. I typically shy away from white wines, but since the samples are free, I took one of everything they offered. We tried 3 whites, 3 reds, and then moved to the desert wines. The first winery was known for their port wines, so they had several for us to sample. I wasn't too familiar with port wines, but they are a wine that has been fortified (brandy was added) to stop the fermentation and boost the alcohol content. Port wines are usually sweeter and are served as a desert wine. Typically ports are red, but this winery had made a white port as well. They were excellent, a nice strong finish to complement the smooth tasting wines sampled previously. Downing 9 wine samples in 25 minutes had greased our wheels, and we were chomping at the bit to get to the next winery. 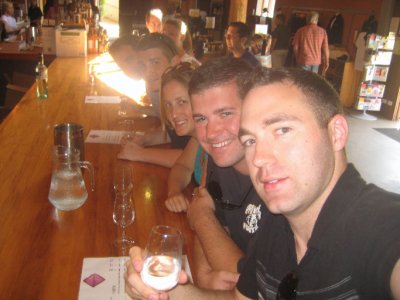 The next winery was only around the corner, so we were there in 5 minutes. Knowing the routine now, we lined up along the bar for the tasting to begin. The second white we tasted was called The 'O', which stood for "over ice". Immediately I thought of Office Space. Jason and I kept making our 'O' faces after every sip and making the 'O' sound. 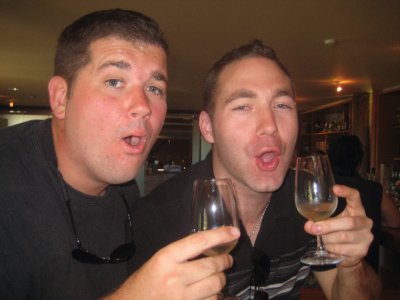 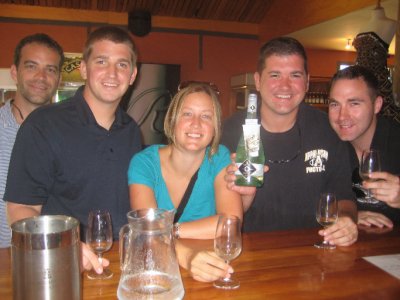 We moved on to the reds, eventually getting to a Shiraz called GSM. Shiraz is generally regarded as the top type of wine that comes out of the Hunter Valley. The environment is very well suited for the grape (or so I was told). Throughout the day, the Shiraz wines were actually the most diverse and best tasting wines. The GSM was the best wine I had tasted at that point on the tour. The girl behind the bar explained that it stood for "gimme some more", but then whispered to us that it also stood for "great sex making". Dawn, Greg, and I each bought a bottle. 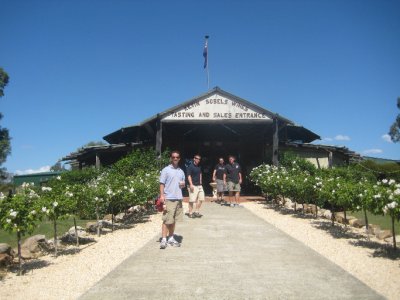 Since we were making such great time, our tour guide suggested we go to an extra winery before lunch. Of course he got no objections from us. 6 more samples later, it was time for a break from wine and to get some food in our bellies. We got some food from a line of cafes, ate in the sunlight of the absolutely gorgeous day, and then lounged on the grass while the rest of the crew finished their meals. 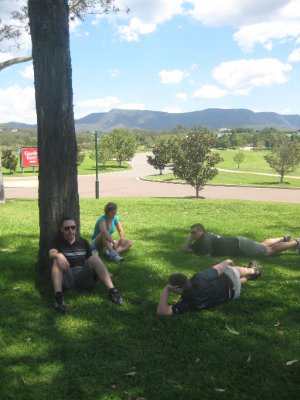 After lunch we had a sit down tasting where we were actually served wine (the other places had all been a walk-up bar). It sounded like a nice idea, but I preferred being able to move at my own pace instead of waiting for everyone to chit chat about the wine after trying it out. After completing the tasting at this winery, it was time for a different type of tasting—a cheese tasting.

I love cheese. I have missed the cheeses of the US. In Australia there is no American cheese, no Monterrey Jack, no Colby Jack, no Pepper Jack, no Munster, and I could go on for all day. The tour guide said that this place had every type of cheese imaginable, so I couldn't wait to finally get something other than Australian 'Tasty' Cheddar. The cheese tasting followed the same pattern as the wine tasting as we all stood along a bar while a lady passed out the samples. We tried a varierty of cheeses, each one seemed to be even better than the next. She also passed around a sample of chocolates. As I tried each cheese and chocolate, I could easily see why certain types of cheeses and chocolate compliment wine very well. After the cheese tasty, we wandered around the cheese hut trying other samples of cheese and bread. Eventually we made our way to the gelato where Jason found his perfect ice cream—"it's a gay time!" 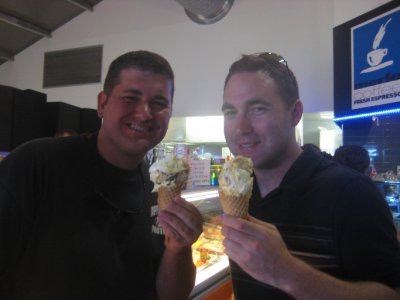 Unable to pass it up, Jason and I each got a cone. The girl didn't understand why we thought the name was funny. After finding out we were American, she explained that Gaytime is an ice cream sandwich in Australia. We finished our ice cream, hopped on the bus, and made our way to the next wine tasting.

After one more winery, it was time to start making our way out of the Hunter Valley. On the way out, we stopped at a beer brewery to do a little beer tasting. The brewmasters only made a small amount of beer, enough to pay the bills and allow them to experiment with new recipes. The beer was very full flavored, a nice relief from the typical Australian lager. Jason took extra tasting samples while I prayed the beer prayer. We snapped a few more pictures and got back on the bus. Our day through the Hunter Valley was over and we headed back down into Sydney (although having to stop every 30 minutes for bathroom breaks). 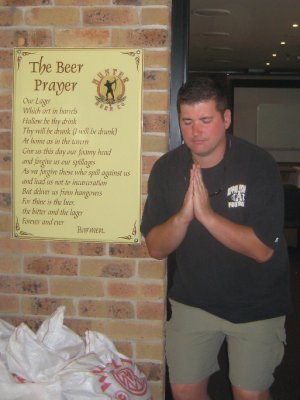 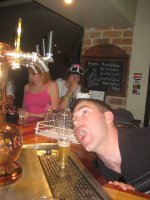 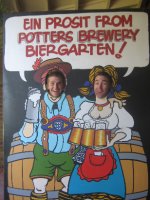