Having left the Colca Canyon and Arequipa behind, we landed in the city of Cuzco. Cuzco had a very different feeling about it compared to Arequipa. A McDonald's ad, a Coca-Cola ad, and a Cusqueña ad were displayed above the airport and were the first things you saw when coming in for a landing. Walking in from the gate, at least 10 different tour companies had booths set up around the baggage claim carousel, and all were clamoring for your attention. Since the trains could no longer make it all the way to Cuzco due to the mudslides, we had to find a way to get to Piscacucho to catch the train. We started a bidding war between several companies to see who would drive us to the train station (as well as arranging to stop by the Western Union so I could pick up the money my dad sent). A lowest bidder finally surfaced, and away we go!

Well, almost. The lowest bidder drove us to a somewhat sketchy part of town (there were no tourists and skinned snakes, pig heads, and plucked birds hanging from shop windows). We were then transferred to a van with 10 other Peruvians. Our guide book warned to not get in a cab with other people and only ride in marked taxis as there had been an increase in driving tourists to remote areas, robbing them, and leaving them stranded. Here we are, squished in a van with a bunch of Peruvians, and about to embark on a 3 hour drive to Piscacucho. Megan turned to me and whispered, "Is this OK?" I confidently answered "of course", but internally I was sizing up the other passengers and preparing myself to fight for the money I had just received from Western Union. The van pulled out of the garage and slowly made its way out of Cuzco. Most of the other passengers started to doze off, but I remained on high alert.

I pulled out the guidebook and tried to follow along in a map to make sure we were headed in the right direction. However, when driving on dirt roads there aren't really any road signs, and there was no way for me to know where we were headed. Shortly after leaving the outskirts of Cuzco we were stopped at a security checkpoint. A police office came up to the window, checked the driver's papers, checked out all the passengers, and then waved us through. I didn't know whether to be relieved that the police didn't see any reason to hold up the van or be worried that we got flagged down in the first place. After about 90 minutes a largish town appeared in the valley of a mountain. Once we got to the main street, half the passengers filed out of the van. I let loose a huge sigh of relief as most of men got out of the van. There was only 3 women and 1 man left, and I felt if worse came to worse, I'd be able to take them. About 40 minutes down the road, the rest of the passengers got out, leaving only Megan, me, the driver, and another girl assisting the driver. Assuming we hadn't reached our destination because they didn't shoo us out of the van, we sat tight. After another 30 minutes we arrived in Ollantaytambo and the van parked. The girl assistant opened the van door and pointed at another van. I guess we were transferring. The new driver looked like he hadn't slept in days and sped off down the single lane road. Kids were walking home from school along the road, but our driver just laid on the horn and zoomed past them all (as kids dived off the road and shook their little fists at us as we passed). The van stopped, the driver motioned for us to get out, and then gestured further up the road. From here we walked. 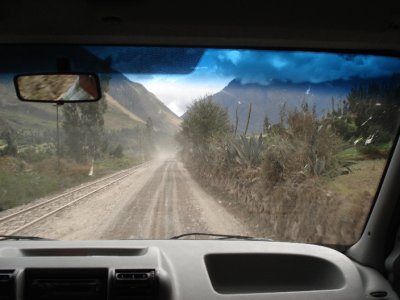 We came to the rail station, and being about an hour early, we were the only ones there. Megan passed the time by playing games on my iPod, I passed the time by counting my blessings that we weren't raped or robbed on the way up here. About 20 minutes before our train left, other buses began dropping off passengers and the train employees arrived. We boarded the train and took off for Aguas Calientes. 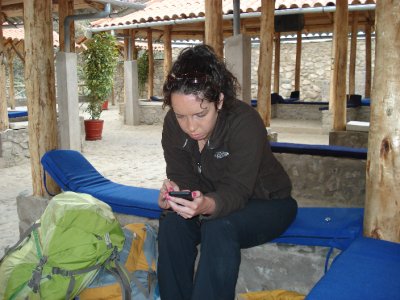 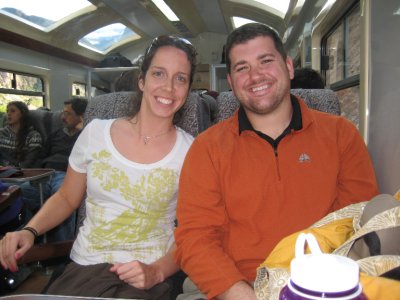 The train was pretty nice, with huge windows that allowed us to take in all the views. The train had to stop periodically because kids would stand on the tracks and beg. Automated messages warned the passengers to not throw money out the window. However, our conductor threw snacks from the food cart to all the kids. After about an hour train ride, we arrived in Aguas Calientes. 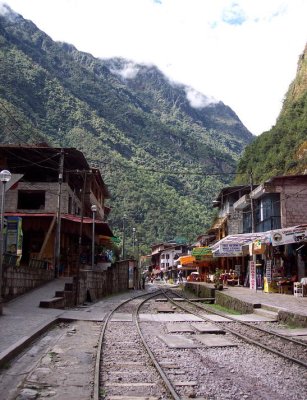 Aguas Calientes had no cars as it was only reachable by hiking or by train (in fact Aguas Calientes only had one real street). A river gushed through the middle of the town. The town got its name from the hot springs present at the top of town, but honestly I wasn't too eager to check out more "hot" springs. We decided to do a hike up one of the mountains close to town to get our first view of Machu Picchu from afar. I had read about an aggressive hike on TripAdvisor that included climbing multiple 100 foot ladders to reach the summit. 4 of these ladders were lined up together, making a 400 ft ascent. I found a picture of it online, and couldn't wait to climb them.

We dropped our bags off at the hostal and walked down the railroad tracks to get to the trail. This trail was much different from the Colca Canyon as visibility was reduced to only our immediate area. Heavy foliage, vines, and trees surrounds the trail. Everything was slick, which made the steep steps a little tricky. 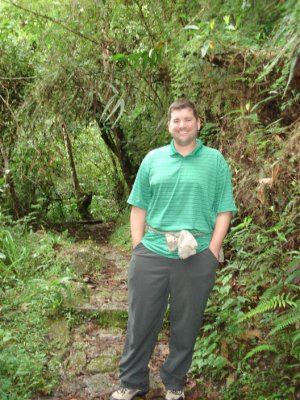 After about 30 minutes of hiking, we came to our first ladder. There was only one of them, but it whet my appetite for reaching the rest of the ladders. 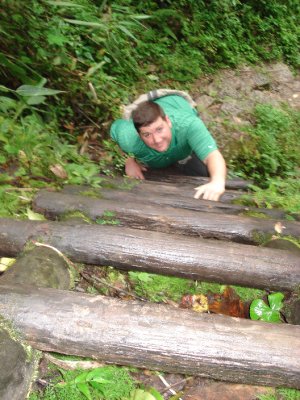 Here is the picture I found online of the ladders (see how the ladders are almost stacked one on top of another). 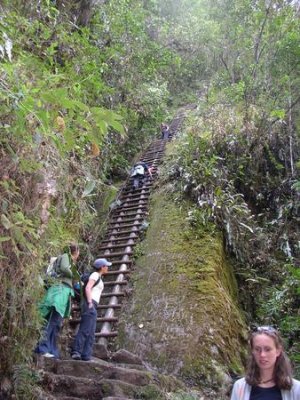 Here is what we actually found when we reached the bottom of the ladders. 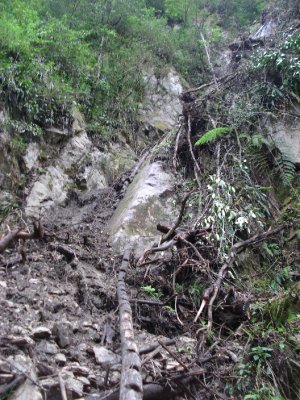 They were destroyed by a mudslide! ARGGHHHH! I was not happy at all. Megan was already a little antsy about climbing down slick stones, so I knew it was a losing battle to try and convince her to use the rope to climb around the ladders. I made the best of the situation and took a picture of Aguas Calientes, and headed back into town. 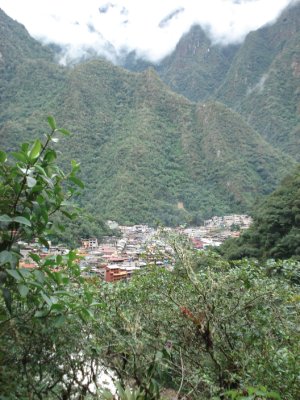 Once getting back into town, we did a little exploring. We came across the church in the main square, along with the main tourist office for purchasing Machu Picchu tickets, and the main bus station. The thing that really caught my attention were these two Inca statues standing beneath a giant Inca statue. I think the smaller statues were supposed to be doing something (like carrying something), but their hands were empty. This left them looking a little awkward, so of course we took pictures with them. The male Inca statue looked like he was saying "You want some of this?!?", so I mimicked the pose. 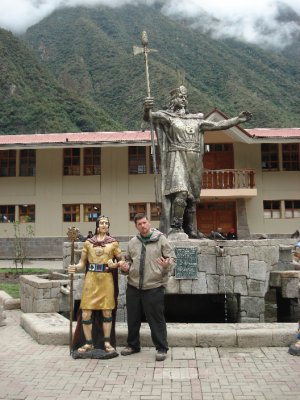 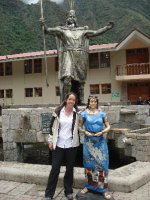 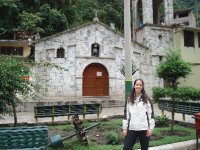 Walking through the main street of Aguas Calientes was analogous to running a gauntlet. Every restaurant had someone standing out front to shove a menu in your face and badger you into coming inside. So every three steps you had to say "no, thank you" to a new person. It was even more frustrating when you actually wanted to look at the menu, because committing to look at one menu meant that you would be hassled extra hard for the next 30 feet. Looking at the menu proved pointless as every single restaurant sold exactly the same things. Pizza, mexican, italian, burgers, chinese, guinea pig, and every other food under the sun was available. We eventually found a classy place that had a giant parrot out front. We chose to sit out on the balcony as no one was actually inside the restaurant. 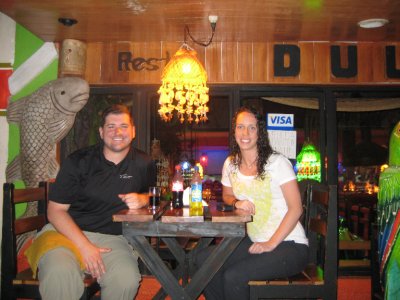 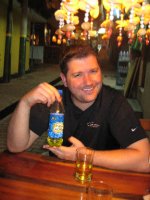 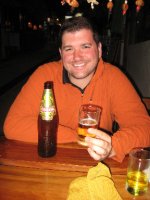 As there wasn't much else to do in Aguas Calientes, we ended up sitting on the balcony for a couple hours. We tried the local Inca Kola (which tasted a like a sweet cream soda to me), and eventually got a couple beers. Then menu listed the beer selections as Small Beer, Medium Beer, and Large Beer. When I tried to ask what types of beer they had, the waitress looked at me with a confused expression. She slowly backed away smiling awkwardly, and came back with a bottle of beer and presented it to me. I realized that they only had one type of beer, Cusqueña. Thankfully it wasn't bad. A local band setup right next to our table and began playing some tunes (as were were the only two patrons on our section of the street). Several locals came over and sat down at the tables next to us to listen to the band. It was the perfect way to spend the evening. The band tried to leave after 3 songs, so I put S\.10 (about $3) in their tip jar and asked for "uno más". They quickly set back up and started playing again. After the song, one of the band members made some type of comment (he said it in Spanish, and like I mentioned several times, I'm not fluent) along the lines of "if we get tips like this we will play all night". I thought he was mocking me, but they kept playing and playing and playing. I didn't complain. Here is a video of them playing.

After two medium beers, we called it a night and made our way back to the hostal. Tomorrow we are going to Machu Picchu!