Getting Back to Our Colonial Roots in Virginia

Time to visit the state where more than half the battles of the Civil War were fought, where 8 presidents have been born, and where 25% of all residents are employed by the federal government. It's time to visit my neighbor to the north, Virginia. 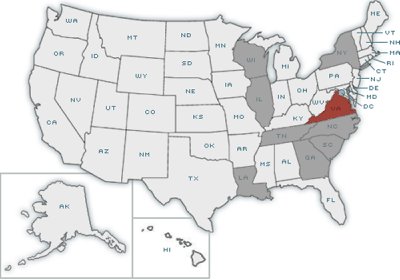 Virginia has been involved in a number of significant historical events for our country. The first successful British settlement in America and the first Thanksgiving occurred here. The Revolutionary and Civil Wars ended here. And my favorite Virginian contribution, the first peanuts in America were grown here.

To experience Virginia, Megan and I embarked on a 500 mile trip through the "Old Dominion". Our trip has a distinct colonial flavor, as our first stop was Monticello, the home of the 3rd President, Thomas Jefferson (A). We then planned on heading east to Colonial Williamsburg, a town dedicated to presenting a picture of Virginia in the early 1700s (B). Our final stop was to grab some seafood fresh from the Chesapeake Bay (C). Our trip does not include going anywhere near northern Virginia, 500 miles is long enough without having to sit in the atrocious DC traffic.

Leaving at sunrise, we traveled the back country roads northward towards Charlottesville. As we crossed from North Carolina into Virginia, we constantly had to stop for hunters pulling off the county highway to claim spots for deer hunting. One particular yahoo found it necessary to stop on the highway to hold conversations with the men getting out of their trucks. After the third such occurrence, I passed him, and he promptly came up quickly with his emergency flashers on. Now I know what an official vehicle looks like, and this was no police officer or park ranger. This was some backwoods volunteer fire fighter trying to flex his local authority. Just as my heart skipped a beat when I saw the flashers, he turned them off and stopped his pursuit. I had almost had my fill of Virginians only 60 minutes into the trip.

Arriving at Monticello, it felt more like a place fit for a king instead of a home for a president. Monticello is located on the top of one of the hills marking the beginning of the Appalachians. The view was phenomenal, and it extended in every direction. We had 30 minutes before our tour started, so we walked to the side of the property to see the some of the fields below. 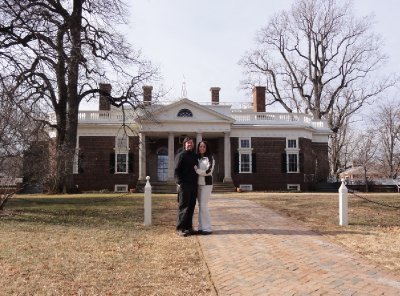 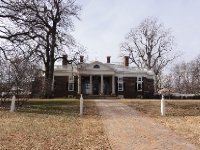 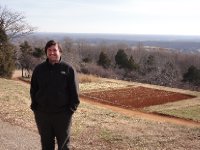 Megan and I walked back towards to house and up the front path. We waited for a tour group to pass, and then waited to get our picture taken in front of the house. Just then, we saw a guy propose to his girlfriend while posing in front of Monticello. There was a lot of hugging and kissing and squeals of happiness from the family. Meanwhile, I'm standing here holding my camera, awkwardly trying to get someone to take our picture, and silently praying that Megan won't be too upset when I don't drop to one knee in front of the house as well. Thankfully our tour group was called, and we made our way into Thomas Jefferson's house.

Thomas Jefferson was an inventor, and his inventions always served some practical purpose. For instance, Thomas Jefferson recorded the weather conditions to track trends from year to year to know when to plant certain crops. He took wind measurements, and not wanting to have to walk far enough away from the house in the rain and snow to see the top of the wind vane, he drilled a hole through the roof so he could view the direction from his front porch (the picture that looks like a compass is the wind vane mounted on the ceiling of the porch). He also built a clock that shows the time as well as the day. He miscalculated the distance needed for each day, so he had to drill holes in the floor and put the markers for Saturday/Sunday in the cellar (you can see the clock above the door and the date markers on the wall to right). He put his bed in the middle of his dressing room and office, so he could roll out of bed and immediately begin working. He had a device that would copy every letter he wrote, so he could always save a copy of everything he mailed. Monticello is full of Jefferson's innovations, every room had several new devices he had created. 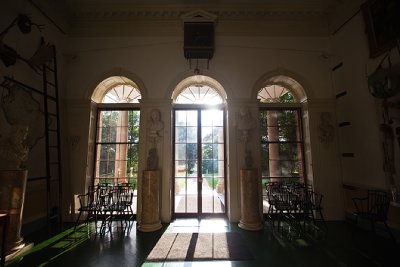 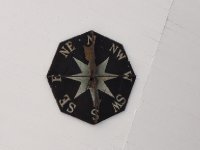 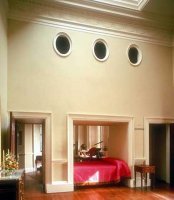 After the tour was over, we were free to roam the grounds. Since it was the middle of winter, none of the flowers in the garden were blooming. We walked by the frozen fish pond and around the back of the house. Walking around the house, it hard to not be impressed by its beauty, and the fact that everything was designed for a purpose made it even more impressive. The walkways extending both directions from the house actually contained an intricate water catching system that is still in use today. The cellars, kitchens, smoke houses, and servants quarters were all next to the house, but underground and therefore out of sight. This impressive house didn't come without a cost. The mortgage, along with Jefferson's love for books, bankrupted his family after his death. In the picture below, you may recognize this angle of the house, it is on every nickel. 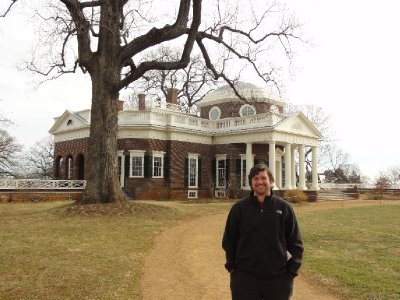 Monticello even had a place for captured British soldiers! 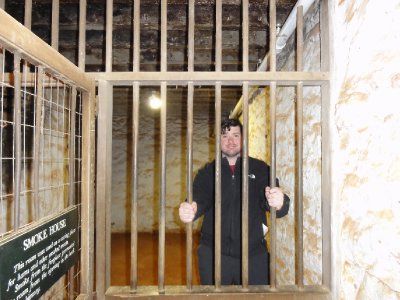 Not really, it was the smokehouse. Megan took a picture inside the kitchen, while I took a picture on the throne which Jefferson spent many hours thinking. 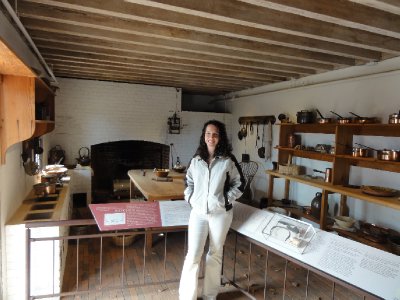 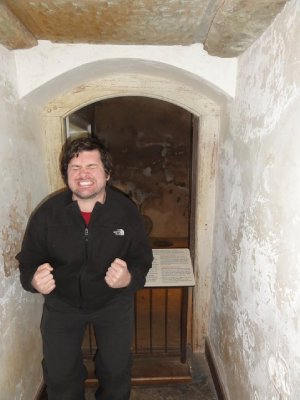 We walked down to the family cemetery, looked at the giant obelisk on Jefferson's tomb (which was placed there by the government well after his death if I remember correctly), and made our way back down the hill to the visitors center. Megan took one last picture with Jefferson before we left Monticello. 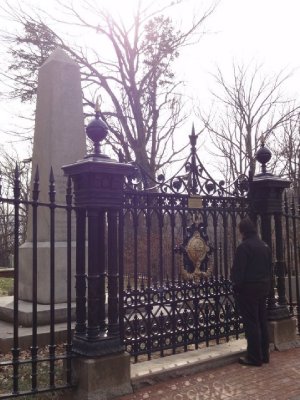 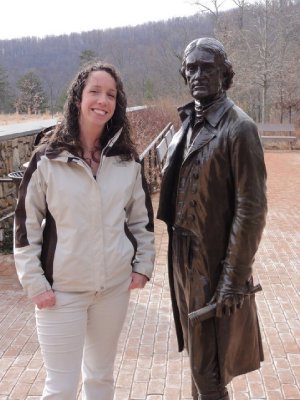 Our next stop was Colonial Williamsburg. I had been to Williamsburg back in 5th grade, and I remember really enjoying seeing how people lived 300 years ago. I remember watching my friend play on an old harp piano and listen to a man talk about being ready to fight against the British. Megan and I left the visitor center and anxiously walked over to the town to take a step back in time.

What we walked into was a shopping mall. The streets may have been cobbled, and the buildings looked old, but only tacky souvenirs were contained inside. It was a tourist trap, and I was really disappointed. The cultural experience I remembered had been replaced by coffee mugs and cheap plastic toys for kids. We went in several buildings, but each one was a shop. Not one person talking about the past, not one demonstration of how life used to be. Megan and I left and continued walking past all the shops onto the campus of the second oldest college in the U.S., William & Mary. 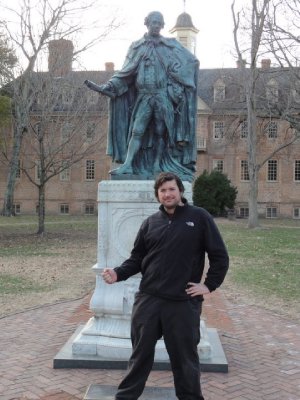 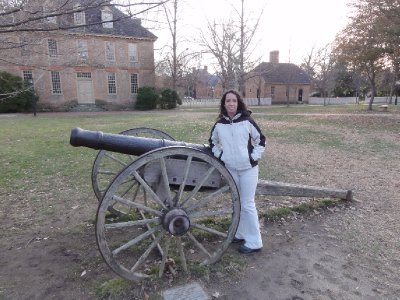 Finally something truly old! At least we found a cannon, and a statue of someone dressed in the garb of the 18th century, but I was still disappointed in the Williamsburg experience. We decided to head out and get an early start towards the coast.

We walked past the shops, and then I heard a man speaking in a British accent asking people to stop and chat for a minute. Looking further up the street, I saw several other people dressed in red hoods and old-timey jackets. We had found the real Colonial Williamsburg! 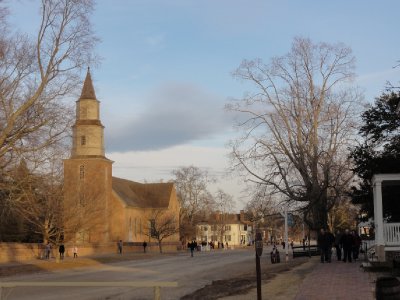 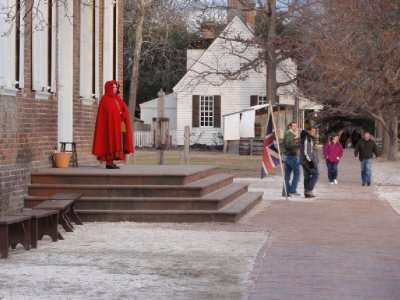 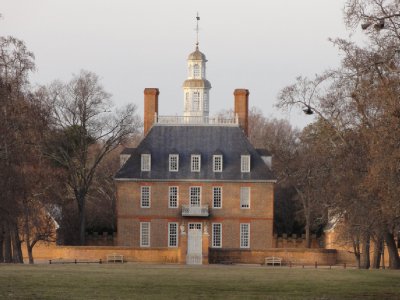 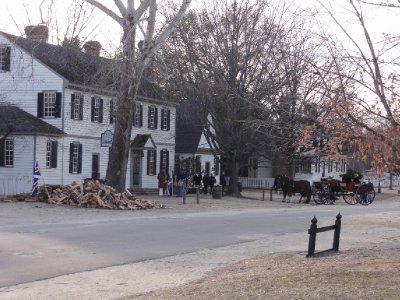 We walked past the old church and the barracks. We walked past the Governor's mansion and the courthouse. It really did feel like we had been transported back several centuries, it was amazing at how realistic the Williamsburg people were. We stopped to have our picture taken in the stocks, and I tried to go inside the Raleigh Tavern, but Megan reminded me that we still had a fair bit of driving left to do. 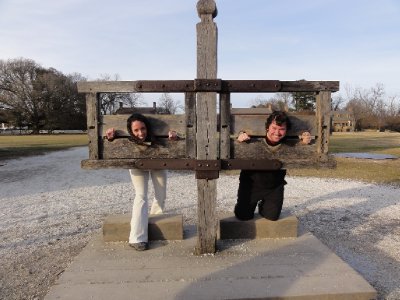 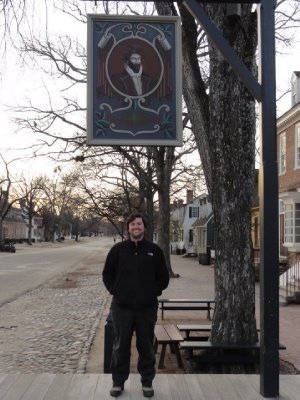 After completing a circuit around Williamsburg, it was time to move on. I was glad that I was able to re-experience the Williamsburg I remembered. And those shops I complained about earlier, Megan and I had a little tacky touristy fun in there too. 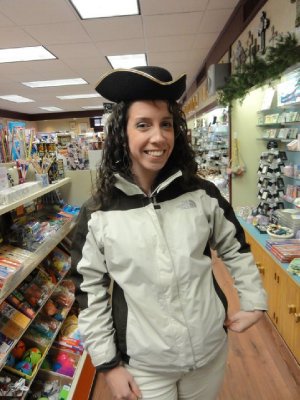 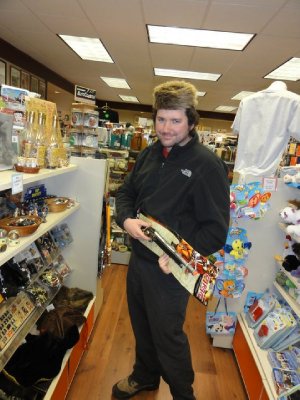 As the sun started to set, we drove across the Chesapeake Bay towards Virginia Beach. At one point, the entire highway dips under the water halfway across the bay (at night, it looked like the highway just disappeared!). We found a seafood restaurant, and promptly ordered the sampler of all their specialties. It was delicious. 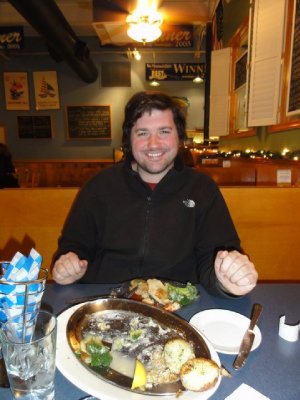 With our bellies full and legs tired, we began the drive home back towards the 21st century.