Portland—Where Great Beer Encouraged Me to Join the Army! 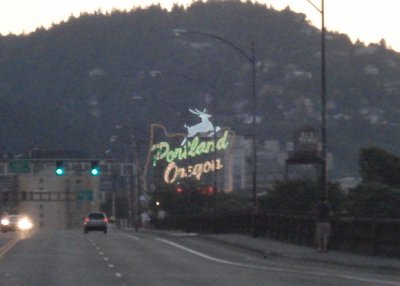 I am in Portland for a week-long Open Source Conference called OSCON held at the Oregon Conference Center (pretty cool building shown in the picture below). Basically, take a couple thousand of the nerdiest people in the country, confine them in an enclosed area, and let them discuss topics that use more acronyms than the US military. It is great to be able to speak geek with others (most of my friends and coworkers shy away from technical conversations), but after 10 hours listening to presentations and participating in group sessions, I was ready to de-geek. 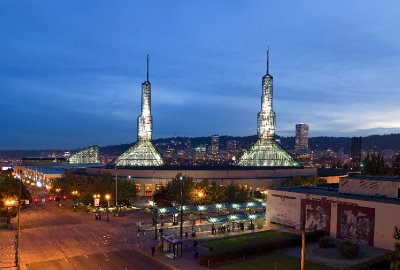 Geeks know a lot of useless information (like the max warp capacity on the Enterprise), but thankfully they also know a lot about good beer. I was able to score some great recommendations on where to go when the conference sessions closed down for the day. The first recommendation was Henry's Taproom in the Pearl District (the hip section of town with loads of restaurants, bars, and shopping). The hotel I was in was located a couple miles from the center of downtown. Portland has an awesome, free light-rail system that serves the downtown area. However, after sitting down all day, I preferred to walk across the bridge to see the city by foot. 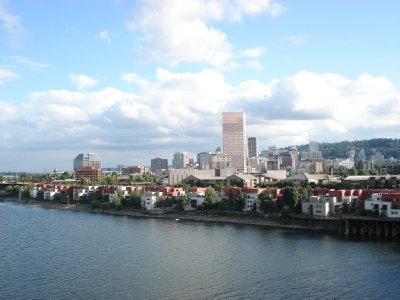 This was the view I had every evening as I walked to grab dinner downtown. Just like the view from the riverwalk in Milwaukee and the incline in Pittsburgh, the river accented the downtown skyscrapers nicely.

Henry's looked pretty crowded, so I killed some time walking around the Pearl District. The largest independent used bookstore in the world, Powell's Bookstore, is located around the corner. The bookstore is so large, it takes up an entire city block by itself! I decided to go take a look around, but navigating a bookstore this large proved a little difficult. There was row after row after row of book shelves, each one reaching to the ceiling. The bookstore was separated into multiple floors, and each room was color coded (although it didn't really help me to know which was the Rose room and which was the Orange room). I wasn't looking for anything particular, so I just meandered through the store. 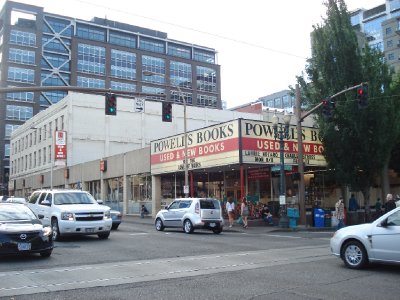 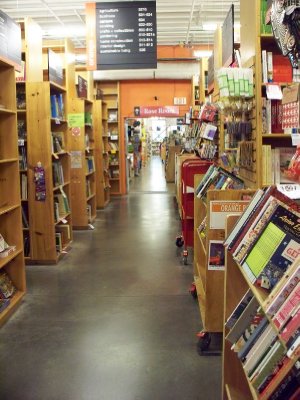 I wandered up to the travel section to read up on Washington, Idaho, and Montana, the next few states I would be visiting, when my stomach flipped. I realized that I was carrying my used paperback book in my backpack, and there was no way to prove it that it was actually mine. I had scoffed at the giant signs at all the entrances indicating that "ALL BAGS MUST BE CHECKED IN", and the clerk gave me a weird look when I just walked past him. I was screwed. I was going to have to buy my own book for the second time. I walked through the store trying to find an exit that was loosely guarded. I'm sure that walking quickly from exit to exit, starting to sweat profusely, with a giant backpack on my back only drew more attention to me. After circling the store for 20 minutes, I decided that I would just have to make a break for it. I took a couple deep breaths, and then walked toward the rear exit while trying to wear an innocent look on my face. I looked down so that I wouldn't make eye contact with the clerk at the register, and prepared myself to be tackled from behind as the security guard ran me down. I burst out the door, and breathed in the sweet air of freedom. I was ready for a beer now.

Henry's Taproom is the type of place where they have 100 different beers on tap. As if that wasn't enough, they also had a ring of ice built into the bar to keep your beer cold! It was awesome. I took a seat at the bar, looked at the beer menu, and decided on the Rogue Double-Chocolate Stout. I ordered a bratwurst with bacon and bleu cheese, and opened the freshly-liberated paperback. I ended up going through another 4 local porters and stouts they had on draft before deciding it was finally time to walk back for the night. Good beer, a delicious bratwurst, and a book that only had to be bought once was a great way to spend the evening. 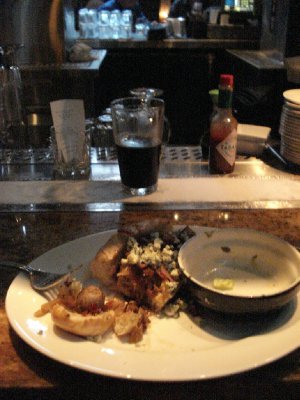 I repeated this process for the next couple nights (minus the terrifying Powell's Book Store episode). During the day, I scouted recommendations on good bars to try out for dinner. I ended up walking to a different part of downtown every night. One night I ate outside at the Green Dragon, while another night I ate a local brewery called McMenamins. Portland definitely had good beer figured out. 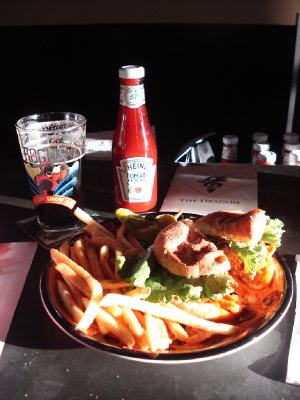 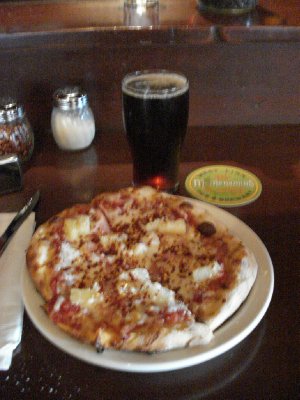 The highlight of the entire trip in Portland was the night I attended the MLS game. The Portland Timbers were taking on Club Atlético Independiente from Argentina. I had tickets to stand in the section reserved for the Timbers Army, the animated supporters of the Timbers. I arrived 30 minutes before the game, got a beer, and got as close to the field as I could. The Timbers Army takes up the entire endzone of the stadium, and it was getting pretty crowded. The members of the Timber Army were dedicated. By the time I found a seat, everyone was already standing and doing the organized cheers. Everyone had green on, and nearly everyone had one of the Timbers scarves to wave around. Their energy was infectious, and I as I picked up on the cheers, I joined in the cheering and dancing. 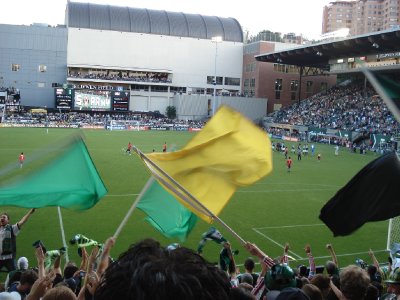 Here is a video of everyone dancing while singing the Tetris Theme.

The cheers didn't ever stop. The drums, trumpets, and cheer leaders went from one chant to another. It was loud 100% of the time, but that didn't prepare me for when the timbers scored. The place went beserk. It was pandemonium, everyone acted like they had just won the $100 million lottery.

Just as the crowd settled back into the normal routine of chants and dances, they scored again. Pandemonium again. The noise was deafening. The Timbers were up 2-0, and apparently life couldn't get any better. After each goal, a giant lumberjack named Timber Joey saws a section of a log with the largest chainsaw ever built. He then parades around with it while everyone cheers. 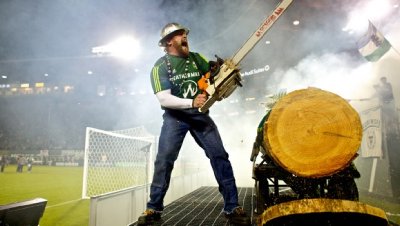 No one left the stands until 30 minutes after the game ended. The players came over, applauded the fans, hoisted the cut sections of timber, and trotted off the field. The Timbers match had been a blast, and although I attended by myself, I never felt like I was cheering alone.

Portland had been a great time, but it was time to leave the beer, the geeks, and the city. I was off to Seattle to meet up with Megan.