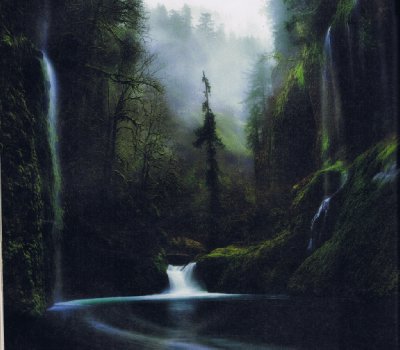 This picture appeared in my National Geographic Traveler magazine that arrived just days before my trip out west. This picture is the reason I am looking forward to visiting Oregon. Waterfalls, giant trees, moss covered trails—a hiking wonderland. This specific waterfall was to be my destination immediately upon leaving the airport. Unfortunately it is a six-hour drive west to reach this waterfall in the Columbia River Gorge from Spokane, Washington where I landed. 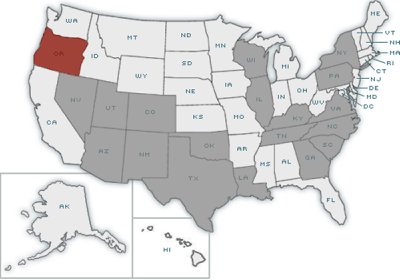 To my surprise, the drive from eastern Washington into eastern Oregon looked nothing like the photograph in National Geographic. 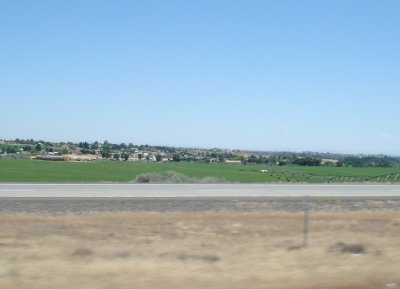 Where were the trees? Where were the mountains? Where were the breweries and the birkenstock-clad, bearded men I had been promised? Much like there is more to North Carolina than sandy beaches and the Appalachian mountains, a large portion of Oregon is void of mountains. The Cascade Mountain range cuts through the western edge of Oregon, and along with a prevailing westward wind, keeps most of the moisture near the coast. I was driving through an arid plateau, and it would be a while until I see any trees.

In fact, the first trees I saw where obviously planted by man. The trees formed perfectly straight lines, it looked like a never-ending tree farm. 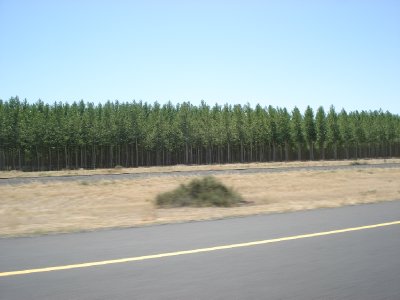 This tree farm was gigantic, stretching for miles down the highway. The Boardman Tree Farm stretches out over 30,000 acres. Eventually the tree lines ended, and I was presented with more dusty scenery. The highway I was traveling on, Interstate 84, runs along the Columbia River, the river that separates Oregon from Washington. Although the river was visible next to the highway, it was far from the view presented in National Geographic. 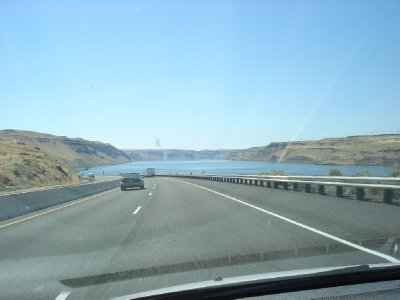 Way off in the distance, I saw what looked like a mountain. A solitary mountain surrounded by dusty plains. In the middle of the summer, it looked to be covered in ice. What I saw was Mount Hood, the tallest peak in Oregon. The Cascade Mountains are actually part of the the Pacific Ring of Fire, the volcanic hotspot that we all learned about in 4th grade that circles the Pacific Ocean. This giant mountain was actually a volcano similar to Mount St. Helens. I was finally getting closer to the mountains and the waterfalls. 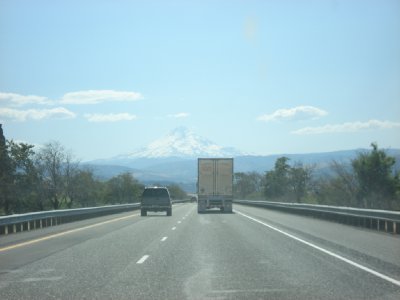 The Columbia River Gorge is the only natural passage way through the Cascade Mountain range. The highway twists and turns as it follows the steep slopes of the mountains. I tried to follow the signs to get to the Eagle Creek Wilderness Trails, but I never saw the exit I needed to take off the interstate. After a couple wrong turns, I eventually was stopped by park security as I tried to enter a secure zone. Explaining that I couldn't find my exit, the park ranger informed me that the exits were only available on the westbound side of the interstate, there were no cloverleaf style interchanges. Following the ranger's directions, I was able to find the trailhead and start my hike into Columbia River Gorge. 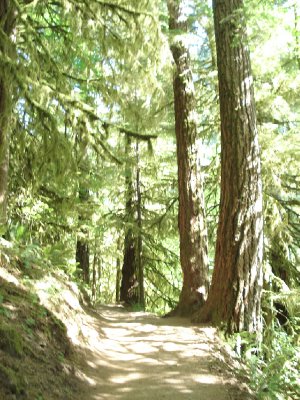 A 5 mile trail from led from the parking lot to the waterfall from National Geographic. The trail was beautiful. Gigantic trees loomed overhead (although not quite as big as the ones I saw while hiking in Tasmania or the Tingles in Western Australia). A picture doesn't really show how big the trees are because no one is in the picture for a reference, but the smaller tree in this picture was easily 50 feet tall, and it would take at least 4 people to form a circle with their arms around the big pine. 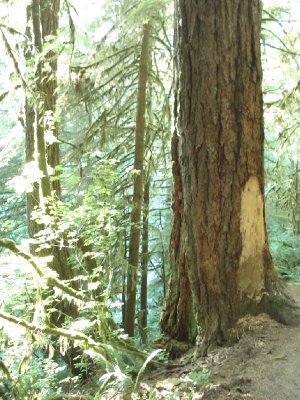 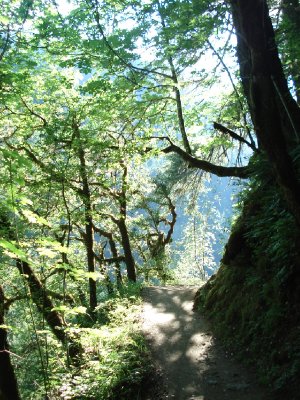 The trail hugged the slope of one of the mountains, and a large pass hung precariously over a drop. A steel cable was bolted to the rock for support, but it was nerve-racking when I had to let go to pass someone on the trail. You couldn't beat the views though. 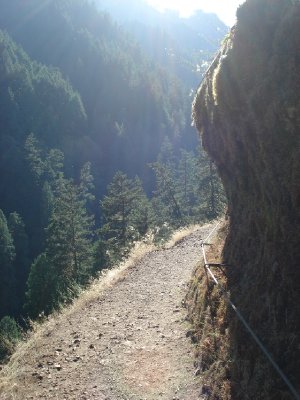 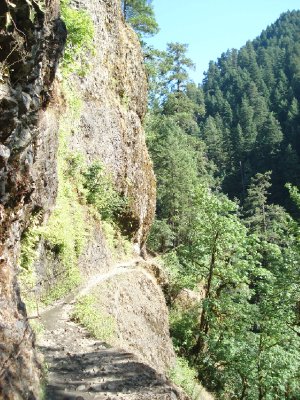 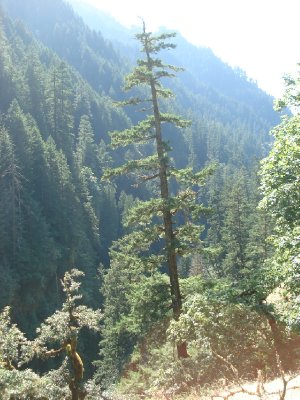 The trail started to make its way down to the bottom of the gorge, and I was presented with my first view of the falls. 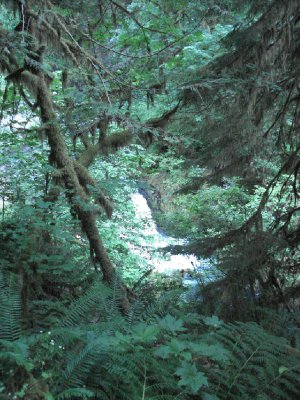 Upon reaching the bottom, several waterfalls cascaded down the valley. People sat on rocks taking in the scenery, while others briefly swam in the cold waters. You can't see the waterfalls in this picture looking downstream, but it gives you an idea of what it was like standing on the edge of Eagle Creek. 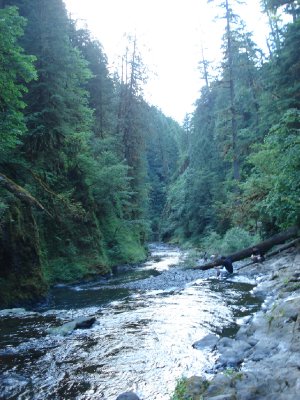 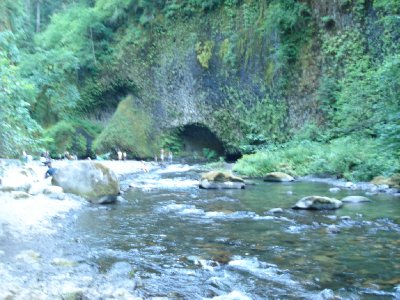 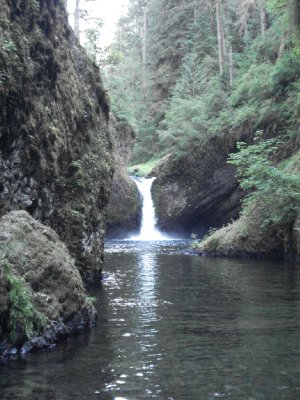 The waterfall (Punch Bowl Falls) is much larger than it looks in the picture (which surprised me). It is over 30 feet tall, but you can't get super close without swimming out to it. I saw a crowd gathering to watch the falls, and then noticed someone fly through the air and land in the water beneath the falls. A group of younger guys were jumping off a ledge 4 times higher than the waterfall! It looked insane, and only a couple actually braved the jump (I assume the rest climbed back down via a trail). I rested my legs and watched a dog fetch rocks from the water. I got someone to take my picture in front of the falls, and then hiked back to my car. My travel through Oregon has only started, as I planned to spend the next week in Portland, Oregon. 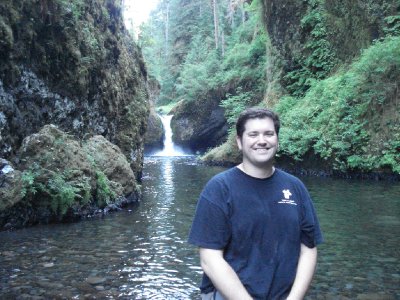