Pittsburgh is the town I hate to love. Pittsburgh is one of the main rival towns of my beloved Cincinnati, and Pittsburghers can often be unbearable (they tend to be loud, boisterous, and not overly friendly to non-Pittsburghers). But alas, I can't help but looking forward to every trip to Pittsburgh. I can't make it back to Cincinnati as often as I would like, and Pittsburgh is similar in many ways. The downtown is bordered by a wide river (actually two of them in Pittsburgh's case), both cities' roots are tied to blue-collar labor, and both cities have awesome food!

Jason, Megan, and I started off the day by going to the Heinz History Center, the history museum for Pittsburgh and Western PA. The History Center is an old warehouse in downtown Pittsburgh that once stored ice. I braced myself for the onslaught of Pittsburgh Pride I was about to endure. 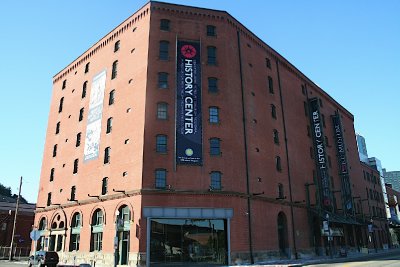 Unsurprisingly, the first thing you see upon entering the Heinz History Center, is a tribute to Heinz itself! 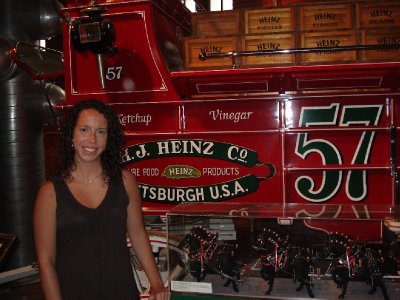 Heinz actually has a half floor dedicated to themselves on an upper floor, but before heading there, we walked through the Pittsburgh Sports Hall of Fame. Here is Megan next to a Steeler (that looks like he is taking a peak down her dress). 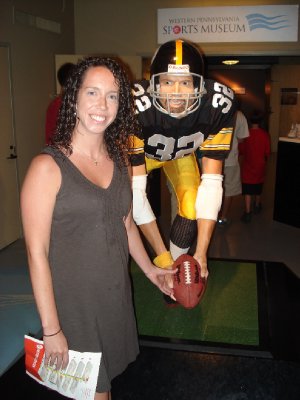 Pittsburgh is the home of the Pittsburgh Steelers, but the Sports Hall of Fame went well beyond the professional level. Of course plenty of Steelers and Penguins memorabilia was present (not too much from the Pirates), but a large portion of the museum was dedicated to local high school sports. They also had a section dedicated to improving your own physical fitness (with a display of what 5 lbs of fat looked like, which was disgusting) and the ability to create your own medals for personal achievements. 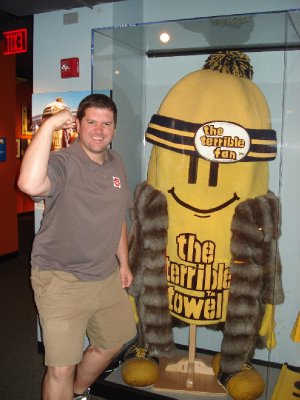 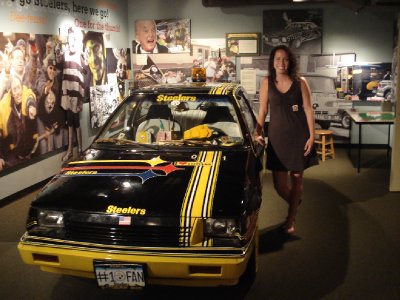 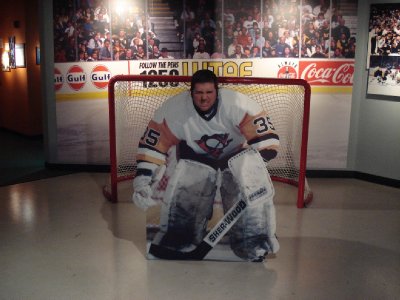 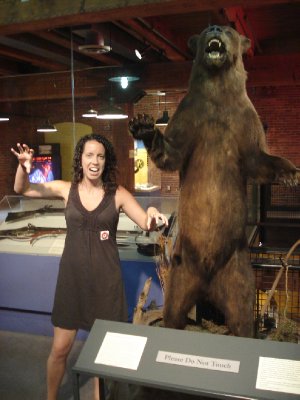 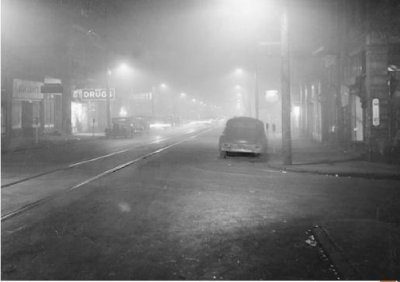 Pittsburgh grew in size partly due to the large number of immigrants that moved into area. These immigrants helped form a distinct accent, "Pittsburghese". Here is a sample of Pittsburghese:

Listen, yinz, ta this story. Last Mundy, when I got home from dahntahn Picksburg, I redded up the hahse, worshed the clothes and did the arning, n’at. Then I decided ta take a break coz I was gettin’ rilly hungry. I looked ina fridge, but it needed stocked. Alls I had was butterbread and leftover city chicken. No jumbo, no chipped ham, no kolbassi.

Pittsburghers are proud of the accent, and every conversation has plenty instances of "yinz" and "jagoff" mixed in. The museum had an entire section dedicated to helping you speak Pittsburghese (notice the caption at the bottom of the display says "Are you a true Pittsburgher?"). 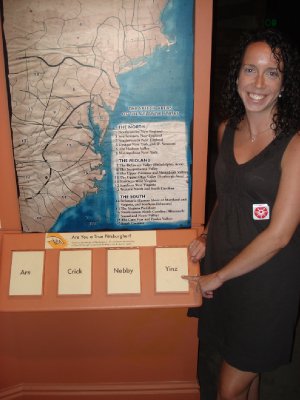 Before leaving the museum, I stopped by to say hi to my friendly neighbor. 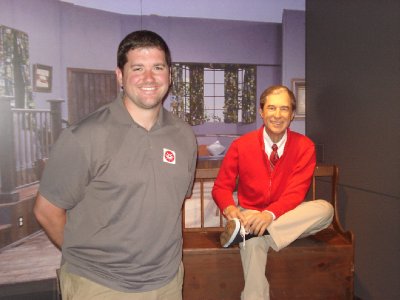 We left the museum and wandering around downtown. The compact downtown area is full of giant skyscrapers as the hills and rivers forced the city to build upwards. Jason took us down to the coolest looking buildings in Pittsburgh, the PPG complex. Here all the buildings are covered in reflective PPG glass, and all the buildings have spires at the top. 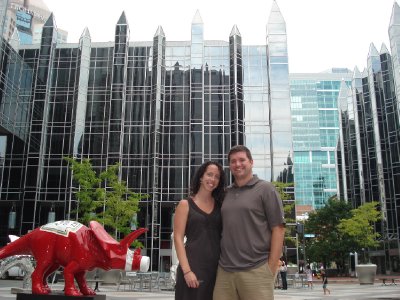 We left downtown and crossed the river into the South Side, a neighborhood on the south side (obvious, I know) of Pittsburgh. The South Side is sandwiched between one of the steep hills and the Monongahela River. Looking up from the river, getting to the top of the hill is daunting. Several tunnels allow motorists to drive through the small mountain instead of attempting to go over. However, many residents live at the top of these hills, forcing them to make the long climb. I didn't envy the steel workers of yesteryear who had to climb the hill on foot. Luckily, incline lifts are available to ferry people up and down. The lifts are not used by the city workers as much any more, but rather by those out for entertainment purposes.

We paid our fee and boarded the incline near the river's edge. In a moment, we started rising quickly above the city skyline. Look at how steep the grade is! 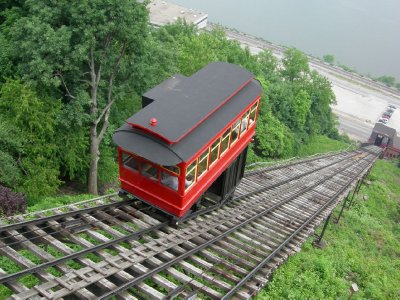 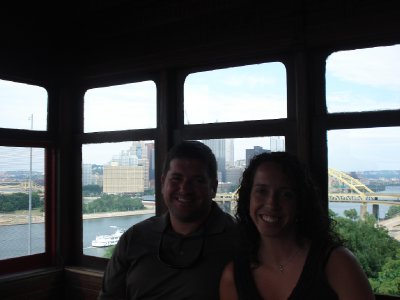 At the top, we were presented with one of the best views of Pittsburgh. It was a beautiful day that allowed clear views of the Pittsburgh Steelers Stadium, the Pirates Stadium, and views of the downtown skyline. 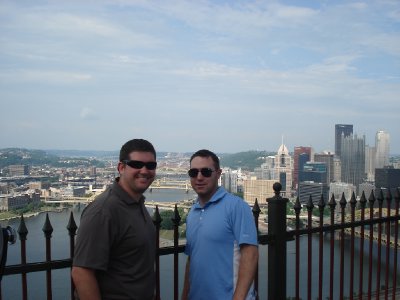 We walked over to a bar with a great overlook and enjoyed the nice weather. After a couple drinks, we took the incline back down. 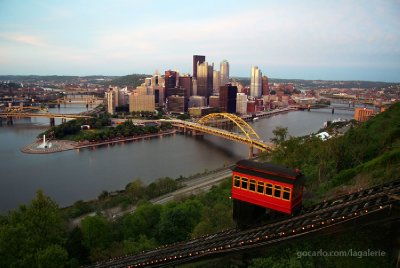 From here Jason, Megan, and I walked further into the South Side. Jason showed Megan his 5 story mansion that was originally built during the civil war (Megan said it reminded her of Ron Weasley's house in Harry Potter). Finally, Jason and I got to show Megan my favorite part of Pittsburgh, Carson Street. 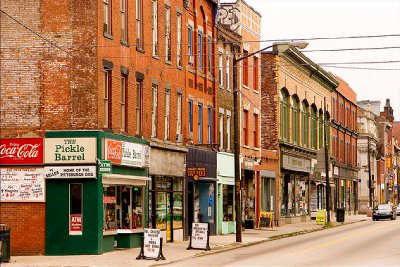 Carson Street has it all—blue collar bars, upscale clubs, piano bars, tattoo parlors, German beer houses, concert halls, restaurants, and dives. I like the authentic feel of the most of the area. The row houses and bars built over 50 years ago are a stark contrast from the strip malls and new developments seen in most other areas. The South Side has character. It also has some of the best food in the entire country. Mike & Tony's Gyros (pronounced ji-rows in Pittsburgh), the giant sandwiches at Fat Head's, and the restaurant formerly know as Tom's Diner are hard to beat. We only had time for one meal, so we went to Primanti Brothers.

Primanti Brothers makes awesome sandwiches. They use locally baked bread, fill it with your choice of deli meat, and stuff the sandwich with fries and coleslaw. The story goes that the sandwiches are made this way so the blue-collar guys could eat their entire meal with one hand. Regardless of the reason, they are delicious. 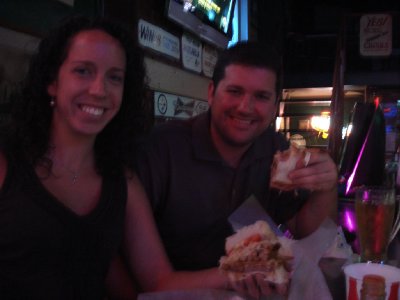 After dinner, we make our way out of downtown. Our trip through Pennsylvania is over, but I'll be back soon enough. I'll see you, Pittsburgh, next St. Patrick's Day! 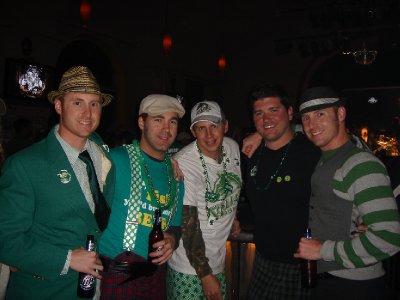