Resting our legs after hiking in Arches National Park, we drove out of the flatlands and made our way into the mountains. It wasn't as steep as driving through the Rockies, but the snow covering the ground made it feel like we were even higher. At one point while driving through a mountain pass, a huge wind farm sat directly in front of us. The blades were lazily turning, and although installing these "eyesores" in the North Carolina Appalachians has been a controversial debate, it was mesmerizing to watch them spin. It may have just been the little kid in me remembering playing with a pinwheel. 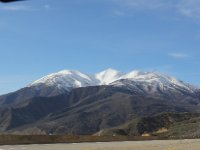 We passed through Provo, which was a disaster. The main interstate was under construction, and our GPS nearly blew up trying to calculate the remaining time on our trip as we crawled foot by foot. We had already been driving 9 hours, and it was only another hour to get to Salt Lake City. We got off the interstate and decided to follow some back roads to bypass the city. Other than the congested highway, the city was beautiful. Scenic farms with mountain backdrops were only a mile from the city. A mix of rustic barns and the colors of spring were able to take my mind off the traffic momentarily. We looped back to the highway just in time to see some crazy people jumping off cliffs wearing parachutes. 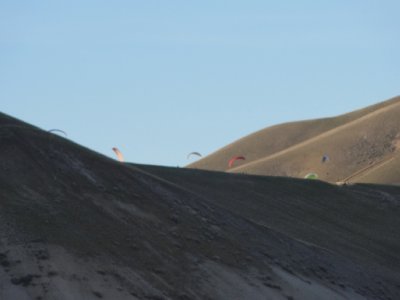 We entered into Salt Lake City in the early evening. You can't help but admire the gorgeous views from the city. Snow-capped mountains surrounded the city to the east, while the lake borders the city to the west. It was very pleasant outside, and the grass was a rich green (which was a stark contrast after staring at sandy-brown dirt and shrubs for the past week). I could see why Brigham Young selected this spot as the home for his community and his church after conflicts forced the church to leave Illinois. 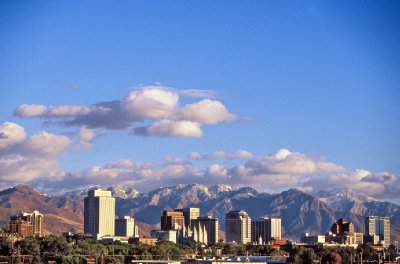 We drove right through the heart of the city to reach our hotel. As we aproached the end of the drive, I was surprised that we got such a great location while booking a hotel through Priceline. We passed the Utah Jazz NBA Arena and turned onto Temple St. The GPS had said we reached our destination at this building. 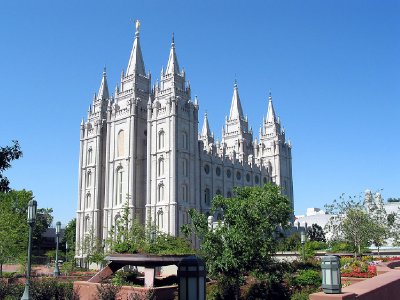 This is the Salt Lake Temple, the largest temple of the The Church of Jesus Christ of Latter-day Saints. Obviously this was not where we were staying. After consulting the hotel confirmation and the map, we figured out the error. The address for the hotel was 2100 Temple St, but the "2" was covered by a paperclip, and Megan had entered the address of 100 Temple St. Since we weren't staying within walking distance of the arena or the temple, we took in the beautiful gardens surrounding the temple while we were there. A crowd of people were walking into the arena, apparently a big game since the Lakers were in town (about 1/3 of the people had Lakers jerseys on).

I was amazed at how wide every street in Salt Lake City seemed to be. Even down side roads and through neighborhoods, roads were easily 5 lanes wide. Apparently Brigham Young had designed the city streets to make sure that you could do a U-turn in a horse and buggy on any road in the city (or at least that is what I was told by a local who overheard Megan and me talking about it). 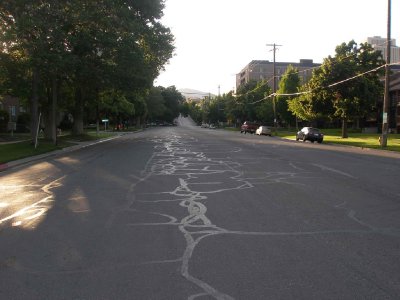 Megan and I got back in the car and headed towards the hotel. Good thing the roads were 6 lanes wide, because 4 of them were closed to construction (although I didn't see a single person working on the two mile stretch of road). I nearly went blind from all the reflective strips on the construction barrels. 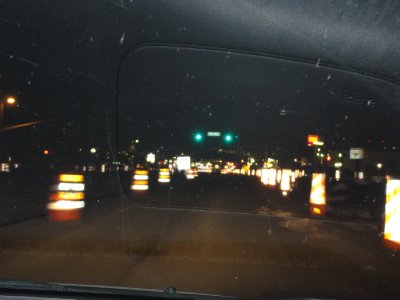 Although Mexican cuisine had been a frequent choice for a meal on this trip, we had been told that the best place to get dinner in Salt Lake City was the Red Iguana. The place was busy, as expected on a Friday night, so we got seats at the counter/bar. The specialty at Red Iguana was their variety of mole sauces. I'm not sure how many of you have ever been with Megan at a restaurant, but she needs time to consider each choice on the menu, and many choices means a lot of time to decide. We were given 9 different types of mole to try, and she began the scientific process of deciding which one she liked the best. A basket of chips later, she had finally made her selection. Only then did she open her menu to decide what food to put the sauce on. The waiter saved my sanity by suggesting a combination that sounded appetizing to Megan. The food was fantastic, and well worth the wait. As good as the food was, Megan was even more excited by the mango margarita. 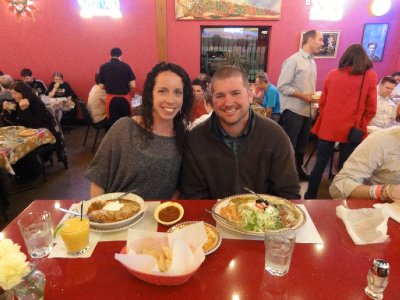 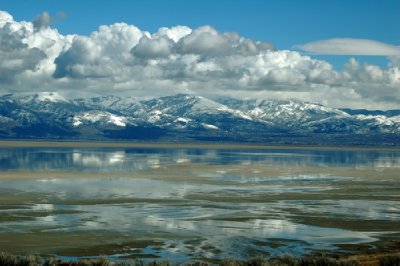 You can see how the water line seems to be pretty far from the shore. Since the lake is so shallow, its size can change drastically. A lot of the snow has not melted yet, so less water is flowing into the lake. I had wanted to swim in the lake, but it was a little cold to do that. And since the water was so far from the shore, I didn't even get a chance to dip my finger in.

We drove up to the visitor's center to get some information on the trails. There are a lot of different trails, and we wanted to make sure we went on the one where we would most likely see antelope and buffalo. The visitor center had a display of the two animals living in the Great Salt Lake (something does actually live in it), the brine shrimp (seamonkey) and salt flies. They had information on how the lake was formed and the types of animals living on the island, but not any information on which trails would be best for seeing wildlife. I found a ranger and asked her where we would should go, and gave me a look indicating I had just asked a stupid question and replied, "Anywhere but the visitor center." 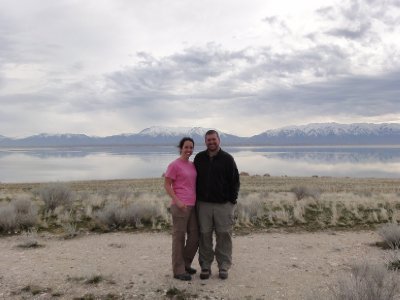 We left the visitor center and headed out to a trail that led up to a lookout on top of a hill. The trail was short and steep, but it did have great views of the lake and the rest of the island. They even had telescopes mounted at the top to allow you take a closer view. I scanned everywhere for bison and for antelope, but didn't see any. Disappointed, we hiked back down to the car to get to the next trail. Our disappointment didn't last long, a couple miles down the road we ran into our first group of buffalo. 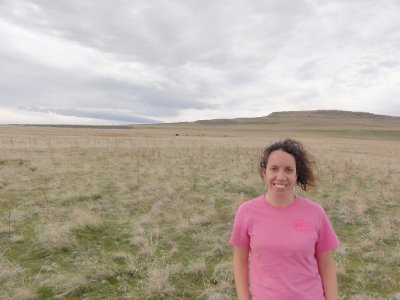 The bison probably look like ants in the picture, but they were only about 70 yards away. We got out of the car and watched them for a while, but they didn't do much except slowly make their way across the field grazing on the grass. I wanted to get closer to them, so we figured we would head out to the most remote trail in the park (and theoretically where the most wildlife would be).

Our destination was Garr Ranch, the home of the people who originally used the island as grazing land for cattle. Although the land is now a park, the ranch is still in use as a ranger station. No cows are on Antelope Island anymore, but a different type of livestock is raised here now. The park actually introduced the bison, and annually round up every single one to do vet check-ups. They try to keep the number of buffalo around 400-700, and sell off the extras. The island really was pretty big. It took nearly 25 minutes to drive to Garr Ranch on the other side of the park. 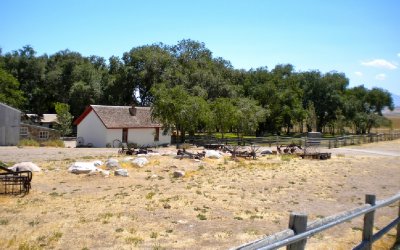 In one of the barns next to the ranch, a museum of old tools and signs are on display. Utah didn't become a state until almost 1900, the US government not ready to accept a state that allowed polygamy. In fact, Brigham Young had to be removed from his position as governor by the US Army because he was becoming so influential and powerful. The museum was OK, but we were more interested in seeing something that was still alive.

It didn't take long in our hike to see our next bison. He was huge! It was as close as I had been to one since I saw buffalo in Deer Park in New Zealand, only this time I wasn't in a car. 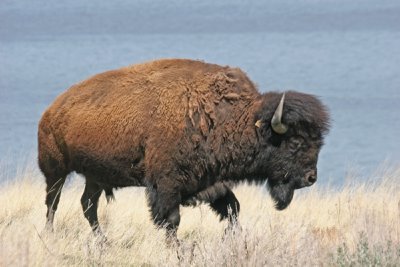 As the trail came over the rise of a steep hill, we saw our first antelope. They turned and ran up the hill as soon as they saw us. 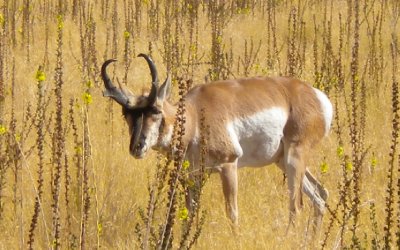 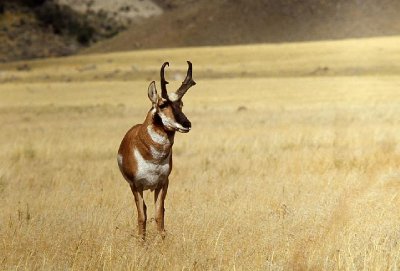 The trail was 5 miles long to the top, and it offered great views down both sides of the ridgeline that divided the island. More buffalo were visible on the sides of the hill. A fire was visible across the lake, the tall orange flames clearly visible even from miles and miles away. 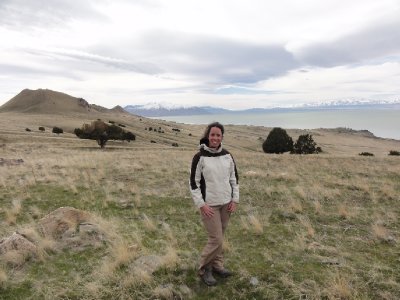 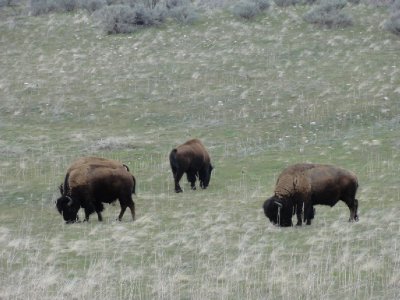 We walked back down the trail to the ranch. Earlier in the day we had been the only car on the road. Now other cars and cyclists were winding their way through the park. It was a beautiful day, and it seemed like everyone was making the most of it. We passed more antelope and bison visible from the road as we left the park. Since we had enough hiking for one day, we sat in the car to appreciate the scenic view and the grazing animals. 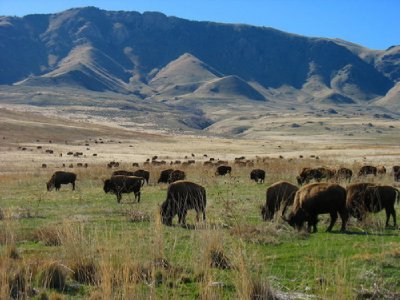 Eventually we made our way out of the park and back into the city. It was time to explore the urban side of Salt Lake City.