We are headed into the heart of New Mexico, the 5th largest state in the US. Albuquerque here we come! 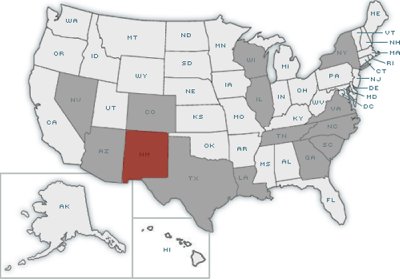 Leaving Colorado heading southeast, the plateaus dwindled away while sandy hills took their place. There were almost no trees or vegetation. Looking on either side of the highway getting close to Albuquerque, everything was just brown. Even the houses were brown! 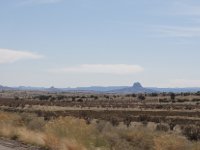 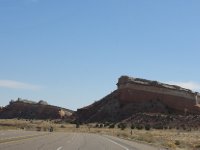 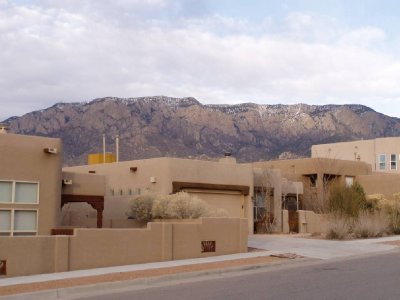 I couldn't be sure, but it looked like the air conditioners were installed on top or on the side of houses rather than on the ground. I guess it was to keep them from getting clogged with sand and dirt? If someone knows for sure, let me know. Another weird thing New Mexicans do—they paint their highways turquoise and a light-brown/pinkish color! 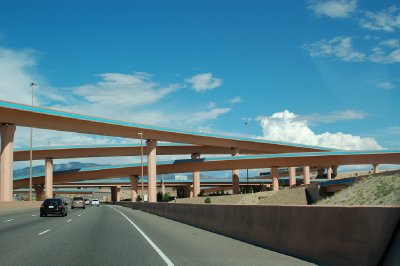 We arrived into Albuerque barely beating the rush hour traffic. Our destination was the American International Rattlesnake Museum in Old Town Albuquerque, the largest collection of rattlesnake species in the world.

This place had a lot of snakes. It was less of an official museum than I had anticipated (it was in the back of a souvenir shop), but the actual snake enclosures were nicer than you would typically see in zoos. Each display had information about the particular type of rattlesnake, and the snakes all looked alert and healthy. They didn't just have rattlesnakes. Other vipers like copperheads, turtles, lizards, and spiders were also on display. 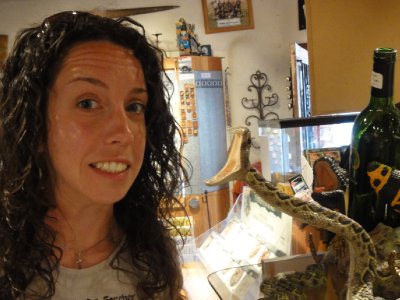 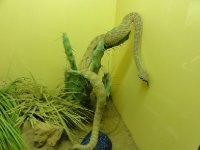 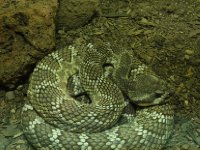 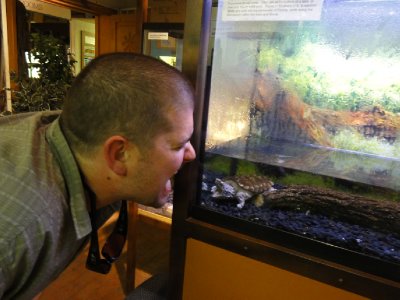 Unfortunately the snakes are fed after hours, so we didn't get to see any feedings. We also didn't get a chance to explore the rest of Old Town as everything was closing down for the night, but it looked like a lot of tourist souvenir shops and restaurants, so maybe we didn't miss that much.

We drove across town to the base of the Sandia Mountains, the towering peaks overlooking Albuquerque. Albuquerque is already at a pretty high elevation, it sits even higher than the Mile-High City of Denver. In fact, almost since we had entered Arizona, we had stayed above 5,000 ft (except obviously when we hiked to the bottom of the Grand Canyon). The Sandia Peak rose much higher into the sky, the summit over 10,000 ft high. You can ride a tramway up to the top of Sandia Peak, precariously dangling you over thousand foot drops along the way. 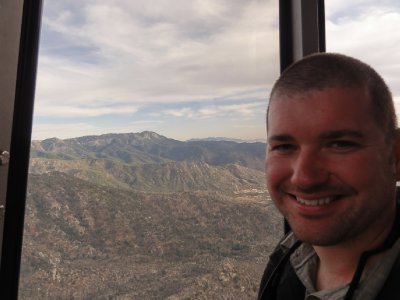 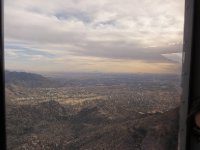 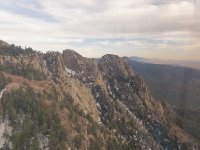 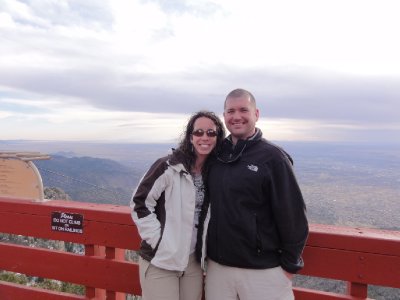 The ride took nearly 15 minutes to get to the top, and we only passed over 2 towers to get there. The Sandia Peak Tramway has the world's third longest single span, and of course this is when you are the furthest away from the ground.

We reached the top and began walking around the platforms. During the winter, Sandia Peak offers skiing down the other side of the mountain. It was pretty quiet at the top now, the temperature too cold for hiking or biking, but too warm to keep snow on the slopes. Remember when we misjudged the distance of the Stratosphere in Vegas and I said you could see far away here in the southwest? Well, the view from the top Sandia Peak allows you to see mountains over 100 miles away. An ancient volcano looms off in the distance, and another ridge of mountains even further beyond that.

You could see rain falling in the distance, as well as sun shining over the mountains. You could see the square borders Albuquerque. Albuquerque is bounded by an Indian reservation on one side, the air force base on another, and the third side stopped by a protected forest. We walked down to the ski slopes and took in the view the other direction. It was pretty cold at the top, so we started to head back to the tram station. We watched the tram climb up over the valley below, and then boarded to head back down to the car. 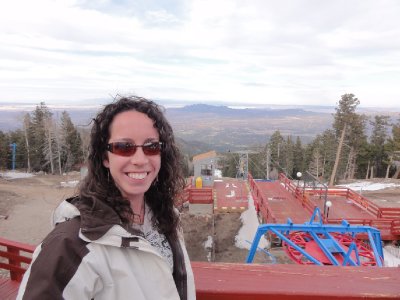 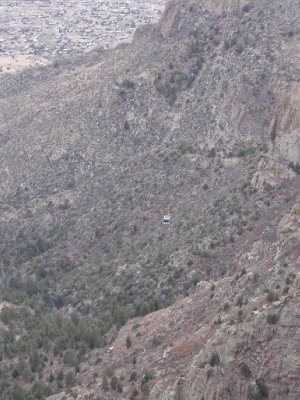 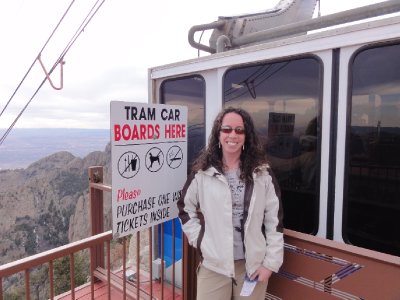 On the way down, we asked our tram driver where to go for supper. He said if you only have one night in town, you have to eat down near University of New Mexico at Frontier Restaurant. He recommended the cheese enchilada with green chiles. Chile is the largest agricultural crop in New Mexico, and therefore New Mexicans like to put it on everything. At Frontier you can get the green chile stew or chopped green chiles on top of your burritos. I opted for the stew, which was more like a sauce. It was pretty darn good, especially when combined with the college atmosphere. We were also given sopaipillas, a flat bread, on which you spread honey. 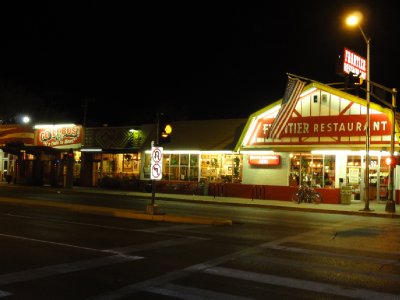 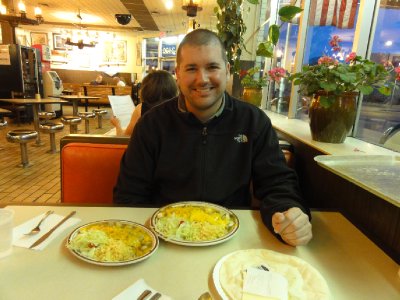 After supper, we walked through the middle of UNM. It was the end of March, but you could still plainly see chalk advertisements saying "Come to our show tonight! Feb 6th!". I guess it hadn't rained in a while. We found some statues, and Megan posed in some pictures. I took a picture with my Wolfpack brethren in the southwest, the Lobos. 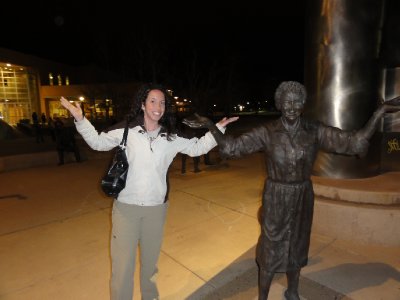 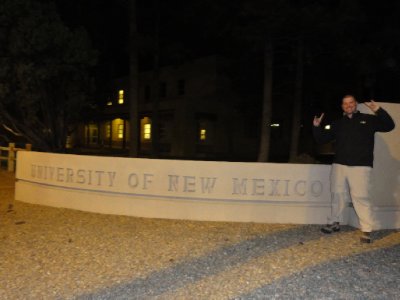 Apparently I was wearing the perfect urban camouflage for that picture.

We were only staying in town for one night, and thankfully I can stop having to spell the word "Albuquerque", quite possibly one of the most awkward words to have to type.