I'm in the heart of the Wild West, the 4 Corners. Colorado, Arizona, New Mexico, and Utah all meeting in one place. I'm surrounded by Indians on all sides. What do I do? Thankfully no gun is needed, the Indians warmly welcome me to see how they live. I'm going to the high desert in Colorado to see how the Pueblo Indians built their homes in the sides of cliffs. 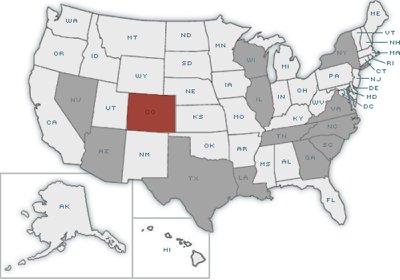 In North Carolina, we have several different tribes of Native Americans, but only 1 (as far as I know) has a reservation, the Cherokee. I have driven through the Cherokee reservation, but all I remember while quickly passing through was the billboard for the casino. Leaving Arizona, it took nearly 3 hours to drive through the Navajo and Hopi Indian Reservations. As soon as one reservation ended, another started. Once we were in Colorado, we entered the Ute Indian Reservation. These Indians are all Puebloan, having left the their dwellings in the cliffs for lands in the flatlands. There were no trees in sight, and the landscape was pretty flat with plateaus at the horizon. Rock formations appeared sporadically, monuments withstanding the erosion to form artistic sculptures along the roadside. 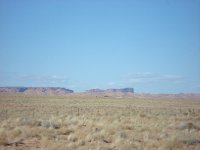 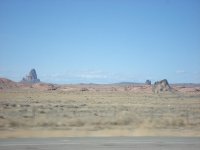 Arriving at Mesa Verde National Park, ice capped mountains were in one direction towards the middle of Colorado, while the red plateaus were visible in the distance back towards Arizona and Utah. Driving through the 4 Corners gave a great view of varying landscapes. 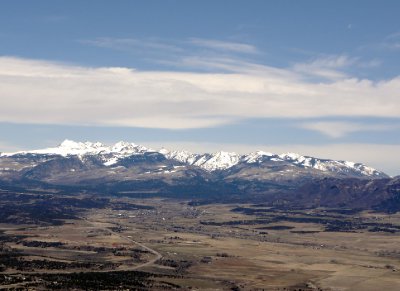 From the entrance of Mesa Verde park, it was still another half hour drive just to reach the first of the old Pueblo Indian residences. Mesa Verde is a slanted plateau covering nearly 100 square miles. The first Puebloan people built their homes on the top of this elevated land. It was very windy on top of the plateau, and the late March air had a sharp, cold bite. Donning hats and gloves, we began to explore the earliest living spaces of the inhabitants of Mesa Verde. 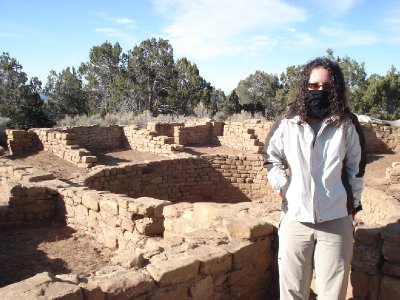 You can see how the living spaces surrounded the circular kiva. The kiva was the center of the community, a spiritual place where people came together. It was sunk deep into the ground and was entered from the roof. The buildings could be multilevels high, but only the base foundations still remain. You could see forever in every direction being on top of the plateau. The Indians also built reservoirs to hold water for irrigation. Fields surrounded the living spaces, where they grew corn and other crops. 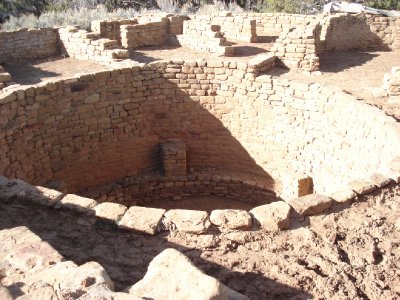 We continued traveling further into the park, stopping at the visitor center to learn about the Indians that lived here. They were excellent pottery makers and basket weavers, both the men and women participating. Lots of relics were found in the area, abandoned by the Indians 700 years ago.

From the visitor center, we walked down to the Spruce Tree House, a group of cliff dwellings that you can walk through. You can see them in the cliff behind Megan in the picture below. 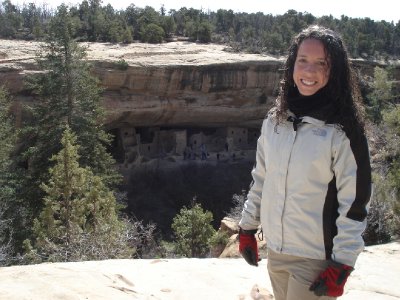 After living on top of Mesa Verde for 200 years, the Indians started building villages in the cliffs. Some believe this was for protection against outside hostiles, but that is not the most prevalent theory for the initial move. Walking down to the dwellings, one reason became immediately obvious. The cold bite in the air was nonexistent once you went below the cliff-line. The southward facing residences were warmed by the sun, while the cold wind blew by overhead. The cliff dwellings were still close to the fields, but added additional protection from the elements. The wild fires that often scorch the ground did not reach down into the cliffs. 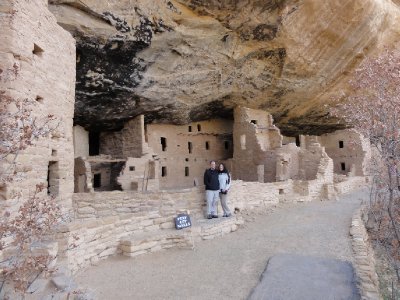 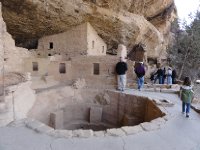 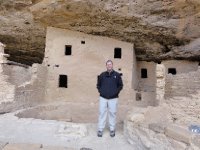 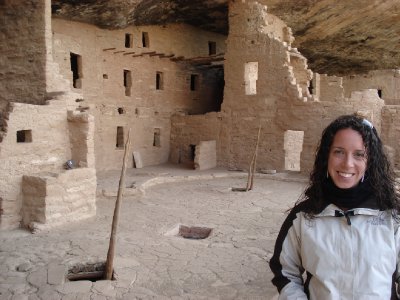 The dwellings were in great shape. The National Park Service has a policy of restoring, not rebuilding. The ruins as we saw them are almost exactly as they were when first discovered. You were allowed to walk right up next to the rooms, look down into the multiple kivas, and get a great picture for how these Pueblo Indians used to live. They even had a kiva that you could climb down into through the roof! The local Indians still consider the kivas to be holy places, so it was cool to actually have access inside. 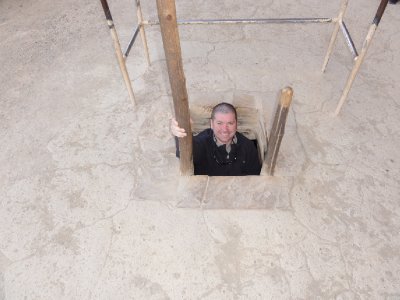 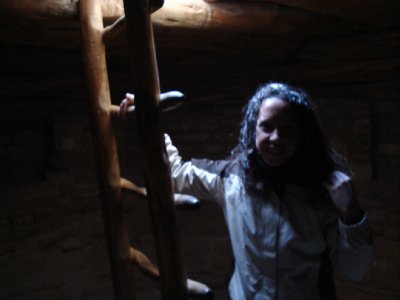 Fires would have normally been lit inside the kiva, and the smell of incense probably in the air. People would be congregating or weaving baskets. Air vents brought fresh air in through the bottom, while additional vents supplied air to the other kivas as well. The insides were plastered over and painted. There are still bowls carved into the stone where the Indians used to process their corn. 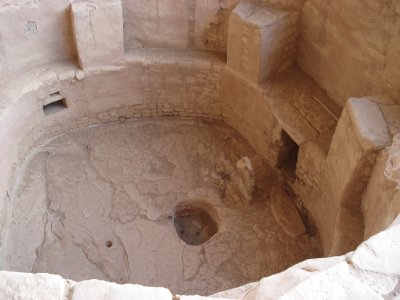 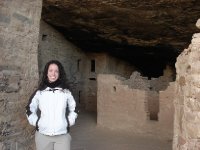 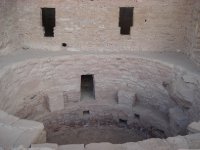 After exploring Spruce Tree House, we walked back up the trail to the car. Sites just like this one are scattered all over Mesa Verde. We got back into the car to explore them from afar. Since the dwellings were all built on the south side of Mesa Verde, the plateaus of Arizona and Utah were visible off in the distance. 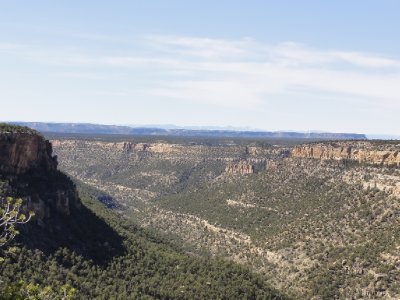 Spruce Tree House is not the biggest site for cliff dwellings. Another section of cliffs had several groupings of dwellings. These seemed more specialized in purpose. One contained a large open area thought to be used for dancing and ceremonies for large gatherings. Another area was called the Fire Temple, and another the Sun Temple. The largest cliff dwelling is called Cliff Palace, holding over 150 rooms and 23 kivas. 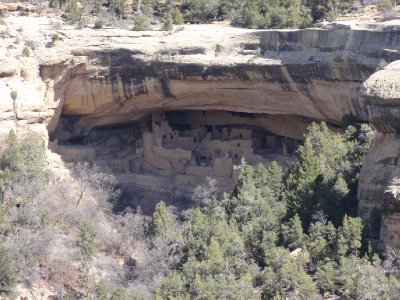 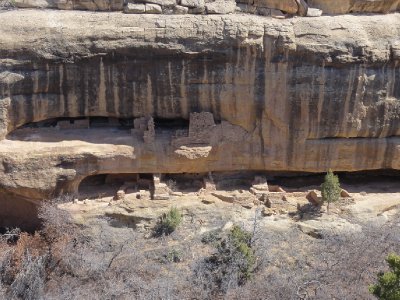 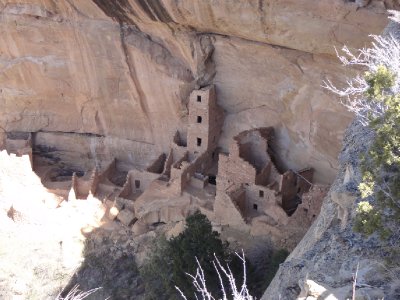 The last photo is of the most recently built cliff dwelling. It is creatively named Square Tower House. It rose over 4 stories, and was actually part of a much larger multistory structure. There is no easy access to this dwelling, presumably for defense. The whole complex can only be entered through a single underground tunnel. Towards the end of the time the Puebloans inhabited Mesa Verde, it seems the Indians started building the dwellings for defensive purposes.

We didn't just get to see old buildings at Mesa Verde, there was plenty of wildlife too. On the drive back from viewing some of the other dwellings, we ran into a group of mule deers. Most scattered when stopped, but a couple stayed to have their picture taken. We also passed by a prairie dog, popping out of its hole. 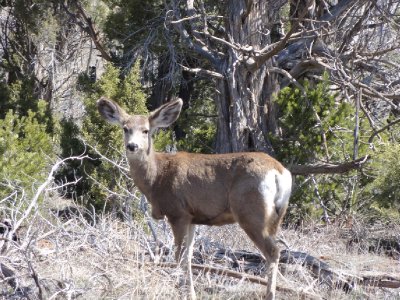 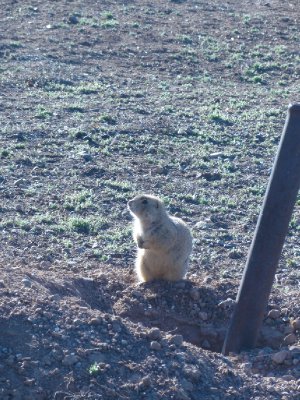 It was a 45 minute drive to exit Mesa Verde, but it gave us a chance to take in the beautiful views. We stopped at the mountain overlook for a quick bite to eat, and then turned south to head into New Mexico.