With our time in Sin City over, Megan and I headed along the highway out of Las Vegas towards Arizona. The flat Las Vegas landscape gave way to sharp, brown hills surrounding the city. The was little vegetation, the ground mostly made up of exposed, sandy dirt. The dry landscape was a stark contrast to the largest man made lake in the United States lurking on the horizon, Lake Mead. 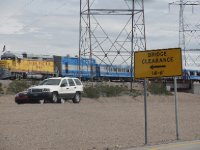 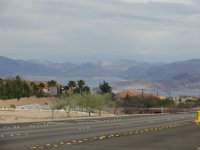 The road took us along the western edge of the Mojave Desert. You are blinded to the fact that Vegas is located in the middle of a desert when you are on the strip, but leaving the bright lights of the city, the desert stretches as far as the eye can see. 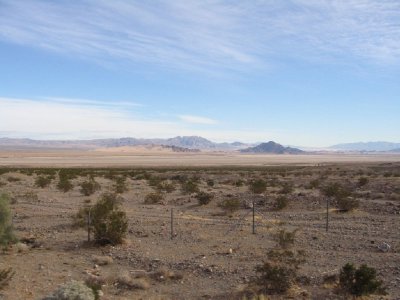 The desert was not our reason for leaving Vegas. 45 minutes down the road, we pulled up to our first stop, the Hoover Dam! 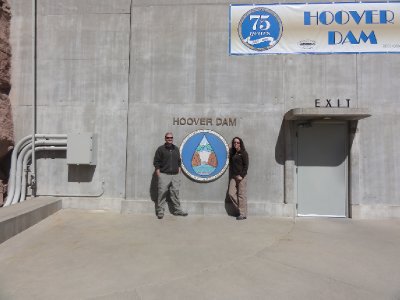 The dam is humongous, but most of its size is hidden from you. The dam is almost as thick as it is tall, over 2 football fields thick at its base. The dam doesn't go straight across the canyon, but instead curves into the lake to help support against the weight of the held water. 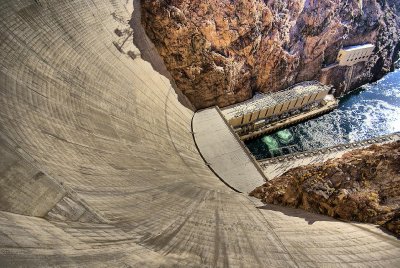 The water stored in Lake Mead is used by Nevada, Arizona, and California. The dam provides electricity to even more states. You can walk across the damn and peer down both sides of it. In fact, the highway used to run across the dam until just a few years ago! As impressive as the dam was from the outside, I had to get my engineer on and see the dam from the inside.

Megan and I purchased our dam tickets to go on a dam tour, and the park ranger promised we'd have a dam good time. We got in the elevator at the visitor center and went straight down to the bottom of the dam. Our first stop was to see the massive 50ft tunnels cut into the walls of the canyon that feed water through the generators. 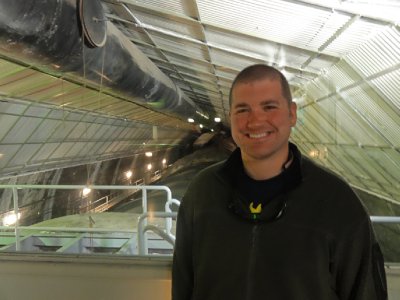 It is a little hard to see, but there is a massive pipe in the background. This pipe went directly underneath our feet. The force of so much water running through the pipe caused the entire room to vibrate, and the air was filled with a humming sound. Our guide talked about how the dam functioned, 4 intake tubes take the water from the lake, split it between the turbines, and then releases the water out the bottom of the dam. We went back to the elevator, went up 1 stop, and then proceeded to the generator room. 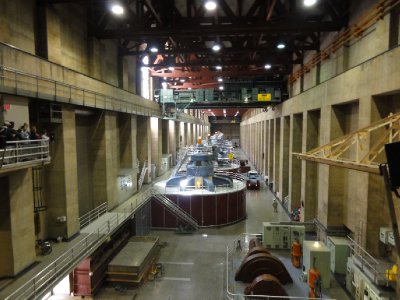 You can see the Nevada side of the Hoover dam (the damn is located half in Nevada, and half in Arizona). The windows on the left allow daylight to come in at the bottom of dam, while the wall to the right is made up of hundreds of feet of concrete. The dam looked pretty fancy on the inside, several artistic designs and granite chips making up the floors. We were ushered back through the rock walkway, and back into the elevator to go back up to the top of the dam. 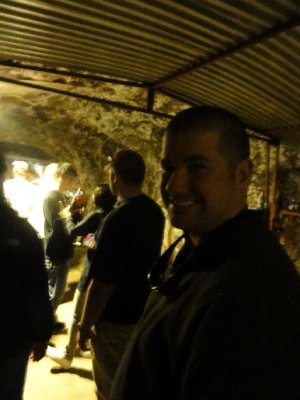 A lot of engineering had to be put into the construction of the dam. For instance, they couldn't just pour the entire slab of concrete at once. It would take over 125 years for the heat to dissipate from the curing concrete, and the resulting stresses would leave the dam cracked and unusable. Instead, they poured the walls a few inches at a time and cooled each block of concrete with refrigerated water. The pipes used by the dam were too big to transport, so they had to build the steel factory on site to make the pipes. The water had to be diverted around the construction site, so tunnels had to be created through the walls of the canyon. It was pretty impressive.

We went up to the observation deck and got some of the best views of the canyon. Megan was a little nervous leaning over the railing (look how tightly she is holding onto the railing). I was able to get her close enough to the side of the wall to get one picture. You can see the Hoover Dam bypass where the cars now travel. Looking below you can also see the state line painted on the dam marking the division between Nevada and Arizona. 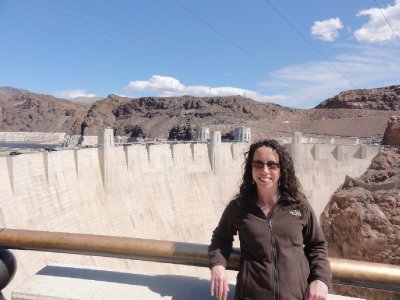 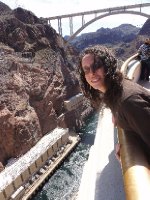 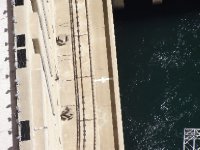 We walked to the back of the dam to see Lake Mead up close. The water level was not close to the top (the lake can be 660 feet deep), but the water does rise close to the top of the dam during the spring melt (the water can only get to 4 feet from top before water is diverted around the dam). You can see the intake towers in the background. 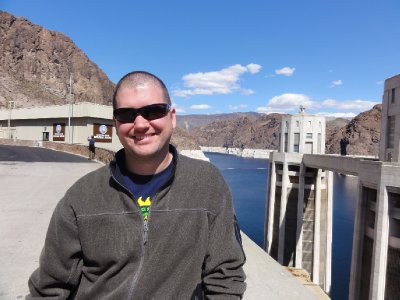 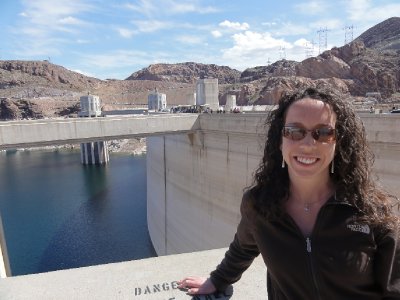 After walking across the dam, we turned around went back to the car. Our destination for the night was Flagstaff, Arizona. 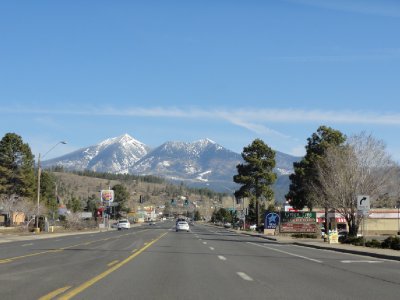 It was all uphill to Flagstaff, which sits at an elevation close to 7,000 feet above sea level (5,000 ft higher than Las Vegas). Snow was scattered across the ground, and there was a distinct chill in the air. The area wasn't really mountainous, but the highest peaks in Arizona are located in Flagstaff. We arrived in early evening, and since we had run out of daylight, we decided to go to a place best visited at night time—Lowell Observatory. 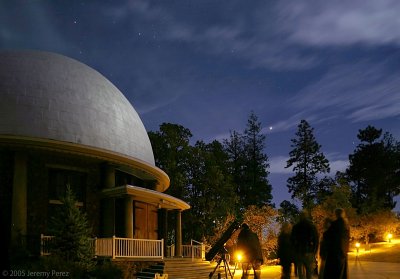 The observatory is located on top of a hill overlooking Flagstaff and presented a nice view. 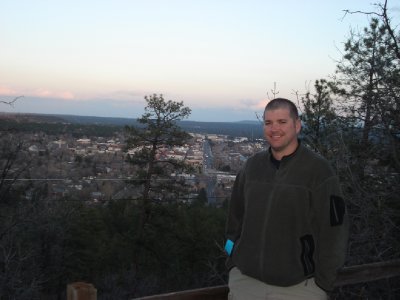 Lowell Observatory is part museum, part research facility, and part hands on. They have some gigantic telescopes scattered across their campus, and they let you go into the different observatories to see them. 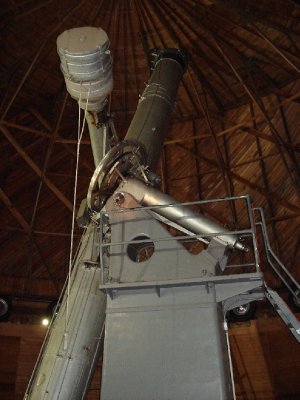 The Lowell Observatory is best known for first discovering Pluto, so it was a hit to their ego when Pluto was demoted to non-planet status. Percival Lowell also spent a large portion of his career studying Mars. He theorized that Mars had series of canals which could be used to prove that live once existed on Mars.

The observatory had setup the telescopes so we could see star clusters, nebulae, and other astral bodies. The didn't just show them to you, but the astronomers talked about what exactly you were looking at and why it was unique. They were very eager to answer questions, and you tell the were enthusiastic about looking into the sky. After walking between the various telescopes we made our way back to the car and back into the city for dinner. We needed to get some rest, tomorrow we hike into the Grand Canyon!