Bachelor Party Time! A group of guys are looking for some warm weather, nice beaches, and plenty of night life. We also wanted to leave our home state, so we headed south to our more unruly southern brother, South Carolina. 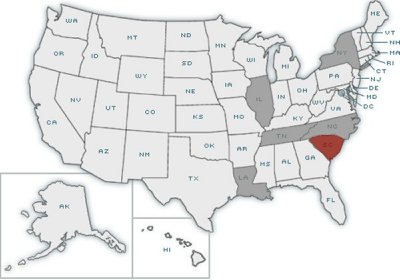 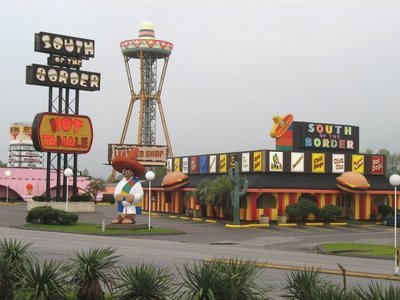 I have only given into temptation once and stopped at the eyesore that is South of the Border, but goodness knows that I have wanted to stop every time I drive past. It's all in the marketing. You are forced to read over 100 billboards for the last 60 miles before entering South Carolina, all with punny catch phrases like "Pedro's Weather Report: Chili Today - Hot Tamale!" and "Time for a PAWS?". South of the Border is filled with cheaply painted statues, a sombrero tower, more gift stores than you can count, a gas station, and a roller coaster. Eager to make my way to Charleston, we skipped the redneck Disney World and continued south.

Charleston is situated between two rivers that flow into the Atlantic Ocean. The harbor is protected by a narrow entrance and multiple islands, making it prime real estate in colonial times. Charleston was the 5th largest city in North America at the turn of the 18th century and largest port in the southern colonies. Charleston has also been in the forefront of the early American wars. The British tried to seize Charleston early in the Revolutionary War and the first shots of the Civil War were fired in Charleston.

My first of impression of Charleston as we entered the city was that it felt like a small town. No buildings were over 3 stories tall. Most of the streets were two lanes. Most of the people were traveling by foot and there was light traffic. By the end of my stay this impression would extend to picture this city as a get-away town for couples (as most people were couples walking hand-in-hand) filled with restaurants, large historic homes, beautiful parks, and a strong southern charm. However, by night the city was even more alive with its vibrant night life making it a great destination for a bachelor party.

Upon arriving in Charleston, I called my old house-mate from Australia, Jeff, who was currently managing a bar in Charleston. We met up with him on Market Street (the central nightlife spot) and hopped through some of the bars. The rest of the bachelor party arrived in from Charlotte, and the whole crew ended the night drinking Charleston's finest on top of Big John's Tavern.

The next day we wanted to take advantage of the beautiful weather and hit the beach. We met up with another one of my friends from Australia, Rob, and headed out to Folly Beach. 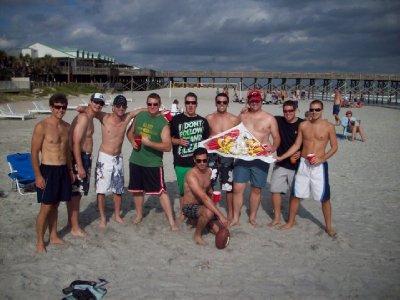 We spent the day on the beach drinking beer, tossing the football, and flying $2 kites we had purchased from the gas station. The kites were of especially poor quality and required a lot of effort to keep in the air. At one point, one of the strings broke and sent the kite out to sea. The weight of the string dragging in the water kept the kite from flying too high and the wind blowing offshore kept the kite aloft. We strained to keep sight of the kite as it reached the horizon, but eventually we could no longer see it. It should be flying somewhere over Portugal about now.

We made our way back into the city, cleaned up, and decided to go out from some seafood. A place named A.W. Shucks was too good to pass up. We had a contest to see who could say "aw, shucks!" the most during dinner. We started off with a load of oysters (which were fantastic) and then moved on to almost every form of seafood known to man. Pete and I split shrimp stuffed with crab and wrapped in bacon, and it was as delicious as it sounds. 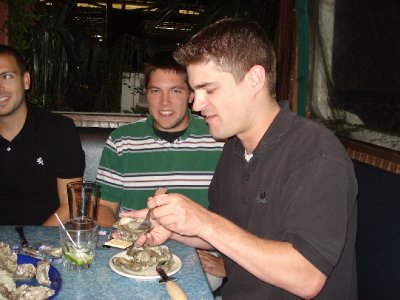 After dinner, we went to Southend Brewery to start our bar crawl. The beer was good, but the music was even better. We got to hear Country Grammar on bongo drums. When made our way from bar to bar, eventually ending up at the pizza joint on Market Street. 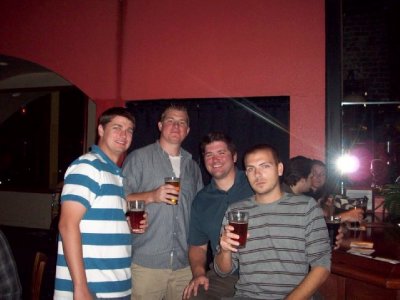 The next morning while the rest of the guys were sleeping in, Pete and I walked down to the water front park near the end of Market Street. From here you could see the harbor stretching out in both directions (and Fort Sumter off in the distance). Sailboats filled the harbor as people took advantage of the sunny day. A pathway wandered along the water front all the way to the east end of town and battery park. 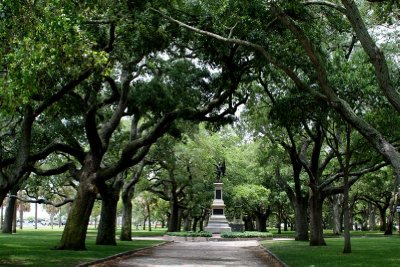 Battery Park had cannon monuments marking the positions where the original cannons had defended the Charleston shoreline. Gigantic trees lined the park. Large, historic homes were visible heading back into the city. It was very scenic, proving that Charleston had as much to offer during the day as it did at night.

We walked back to the hotel, drug the rest of the guys out of bed, and made our way out of town. I started the trek back home to Raleigh, once again barely resisting the temptation to stop at South of the Border.