Chicago, the 3rd largest city in the US, has many endearing characteristics that draw tens of millions of visitors each year. Wonderful museums, deep-dish pizza, the two tallest buildings in the country, and a beautiful setting on the shore of Lake Michigan contribute to Chicago's popularity. However, there is even a stronger draw to Chicago for me. Not only does it give me a chance to hang out with my cousins, I get to watch the Cincinnati Reds beat up on the intradivision rival Chicago Cubs. 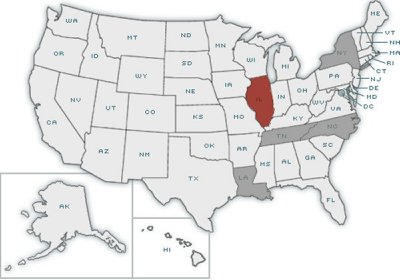 Megan and I left Raleigh after work on Friday afternoon to head to Chicago. We met my cousins, Jill and Bobby, after a quick ride on the 'L' (the "el"-evated rail system Chicago uses instead of an underground subway system) and went out for a bite to eat at Fireplace Inn. Eager to try a local Chicago beer, I tried out the Goose Island Matilda. It tasted great, went down smooth, and I couldn't keep but ordering more. Upon receiving my check, I realized that good beer comes with a price, Matilda costs over $8 per beer!

The next day we made our way to historic Wrigley Field for the noon baseball game. The game atmosphere was electric, especially with all the Reds fans in attendance! Although our seats didn't seem like they would be that great (we were in the last row of the upper deck), we still had a great view of the game (which was probably due to the fact that Wrigley Field is one of the smaller ballparks in the MLB). From our seats we also had a great view of the downtown skyline.

Fittingly, we also were also sitting directly above the Cincinnati flag flying outside the stadium. 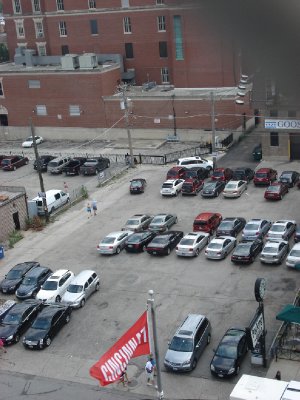 The baseball game had a very classic feel. The stadium sits in the middle of a neighborhood and the scoreboard is still updated by hand. Ivy grows over the outfield wall. Bleachers have been built on top of buildings across the street from the stadium. The weather was warm, the smell of popcorn was in the air, and the beer man had no problem marching up to the last row in the ballpark. 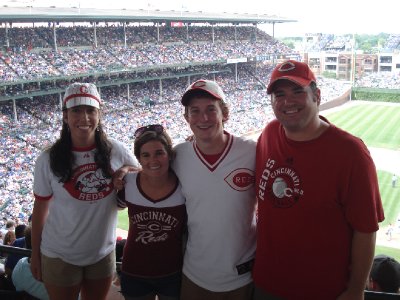 The game ended up being very close. The score remained tied until the 8th inning when the Reds took the lead. Going into the bottom of the 9th, the Reds were up by 3 runs, and we were ready to celebrate a victory...until Cordero came in to pitch the last inning. The Cubbies scored 2 runs, and Cordero got pulled from the game. With 2 outs and the bases loaded, here's the final play of the game:

The Reds win! You can also see why Chicago is the windy city in that video as well, we had a stiff breeze the entire game. Miller Lite had put up a mocking advertisement that read "Cincinnotoday". It was, in fact, "CincinYEStoday". 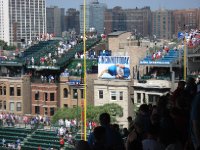 To celebrate we left the stadium and ventured down Clark street. The street was PACKED. Seemingly every fan, both Reds and Cubs, had the same idea. Every bar was filled to the brim and everyone was having a great time. The crowd kept growing, and we got hungry. It was time to experience the deep-dish pizza. 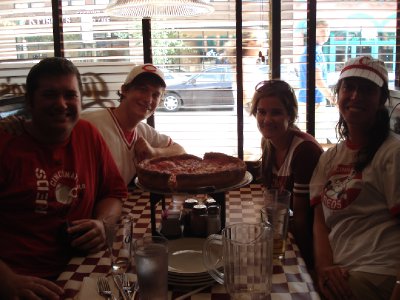 I've had chicago-style pizza before, but Pizano's put them all to shame. This was deep-dish pizza. It probably took 10 cows working all year to make the cheese for just 1 slice. It was delicious, but very filling. After eating, we hopped on the 'L' to head back to Jill's and get ready for the night. 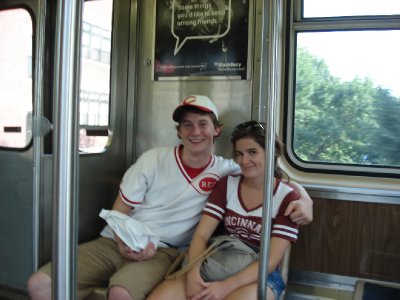 The pizza and long hours of standing on our feet took its toll. Our Saturday night consisted of hanging out in Jill's apartment and catching up. As I mentioned before, the real draw to Chicago was the family, not the night life.

After a quiet night, we got an early start the next morning. Jill wanted to take us downtown to walk the Magnificent Mile (a stretch through the center of Chicago that featured shopping and eating). After a short bus ride, we entered the heart of downtown.

In 1871, a massive fire destroyed 4 square miles of downtown Chicago. The colorful story behind the fire was the Mrs. O'Leary's cow tipped the lantern one night and caught the city ablaze. However, the real cause of the fire was the combination of overuse of wood in construction, a drought, an exhausted fire fighting crew, and strong winds from Lake Michigan. The fire was one of the the largest disasters in the 19th century in the US, but there was a silver lining to the smoke cloud. Relief money poored into the city to help the rebuilding effort. Architects from around the world came to Chicago to build new skyscrapers. The population tripled in the next 50 years. The city flourished. 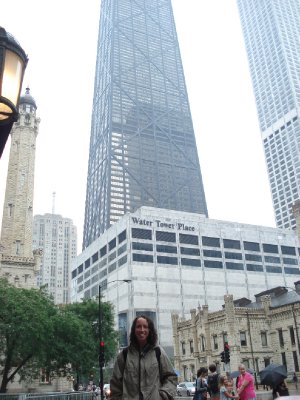 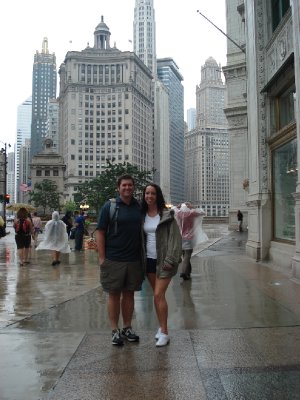 Eventually we crossed over the Chicago River, the source of another disaster in Chicago's history. In the late 1850s a cholera outbreak killed over 5% of the population. Typhoid came next and steadily rose until the turn of the century. The problem was that the Great Lake's drainage system was not quick enough to handle the waste coming out of the Chicago River. To solve this problem, engineers made the river flow backwards to drain into the Mississippi River. Another fun fact, the river is turned green for St. Patty's day. 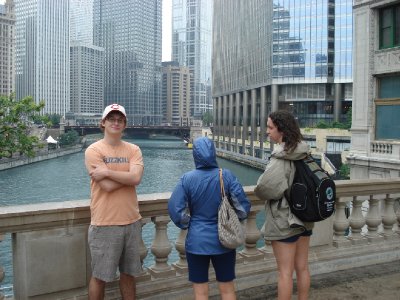 We eventually made our way into Grant Park. Large portions of the park were closed due to Lollapalooza, but we could still hear the music. The park contained the last thing Jill wanted us to see, The Bean. I admit, I was skeptical when Jill told us about it. A giant sculpture is a must see, and its name is "The Bean"? Interesting? Highly unlikely. However, I began to warm up to the idea when we passed a couple other sculptures on the way. It's always more fun when you can relate to the art, and dinosaurs appeal to everyone! 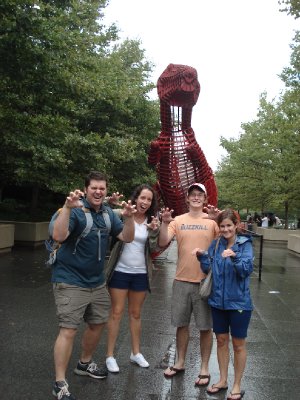 Another piece of art on the way to The Bean was a giant fountain. The fountain had two main sections, each with a face on it. The face made different expressions, and Jill insisted that we wait for a special facial expression.

No, the special expression was not in the video. I don't think I had enough memory in my camera to record for that long. After what seemed like a millennium (just kidding Jill), the faces eventually looked like they were spitting out a new stream of water. However, the spitting fountain and the dinosaur sculpture paled in comparison to The Bean. 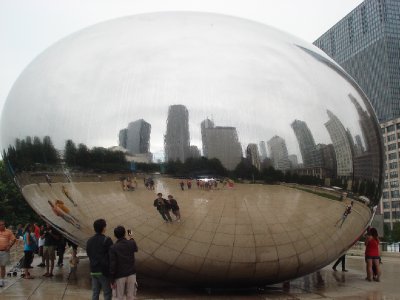 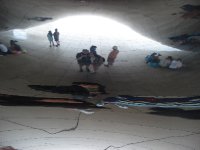 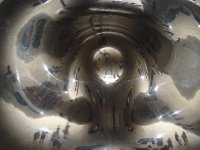 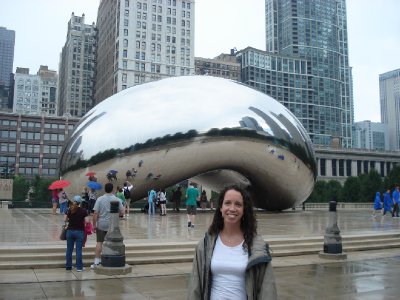 Two of the pictures are from outside The Bean, and two are from inside. You may not be able to tell, but we are in all the reflections. The Bean also reflects the skyline, which was a pretty cool idea. I guess the real appeal to The Bean is the same as a kid in a FunHouse at the fair, it was funny looking at how everyone's reflection got distorted. I think the girls got embarrassed by me and Bobby dancing around and laughing at each other, and eventually I was pulled away.

Bobby and Jill had to leave to head back to Cincinnati, so Megan and I continued southward through the park. The gardens were very nice and offered some great views of the city. The first is a picture of people scurrying into Lollapalooza, the next two are looking north towards the city, and the last is a view south. 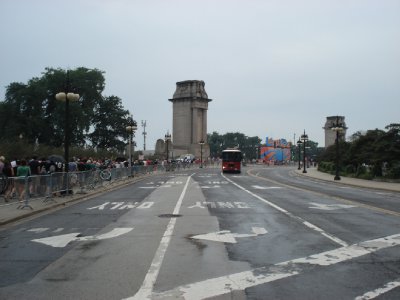 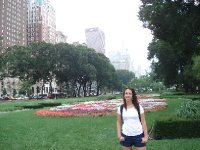 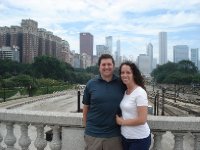 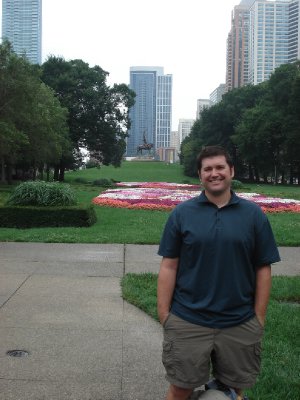 We made our way to the Field Museum, one of the largest Natural History museums in the country. They had more dinosaurs! 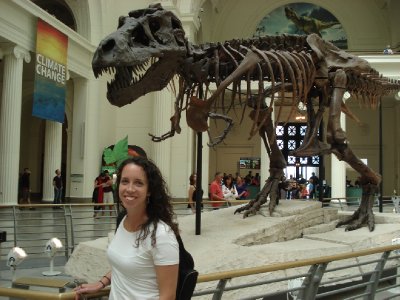 We went into the "live" dinosaur display. It was a cacophony of roars and foot stomps. They had velociraptors that jumped out of tall grass. A triceratops stomped around and let out a roar every couple minutes. The T-Rex stood dominant in the back of the room and tracked you if you got too close (and you could see the T-Rex vision on a monitor). It was awesome. 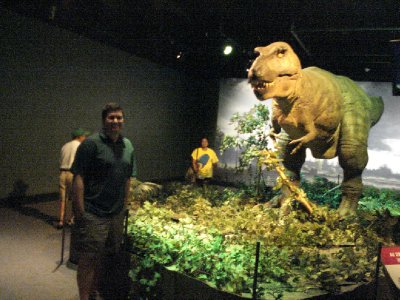 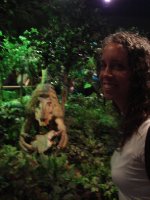 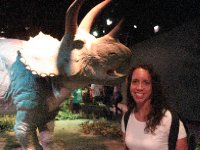 We walked around to some of the other exhibits, but the most fun was the stuffed animal section. It was almost as cool as going to a zoo, and they had tons and tons of different animals. 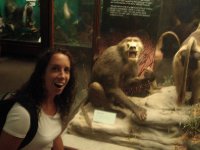 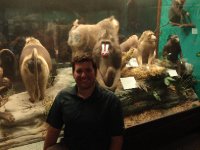 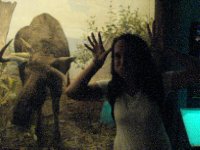 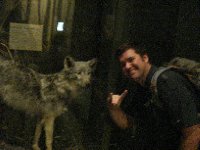 Here's a video where you can hear the noise inside the room.

Our legs were tired after walking around for 8 hours and decided it was time for a break. Leaving the museum you are presented with a great view of downtown Chicago. On the left you can see the two tallest buildings in the US, the Willis Tower (formerly Sears Tower) and the Trump International Hotel and Tower. Lake Michigan is off to the right. Soldier Field was also viewable in the other direction. 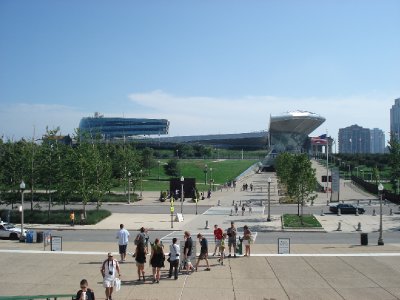 We walked down towards the water to rest our legs. It was beautiful. Boats were everywhere and people laid out to soak in the sun. After a quick rest, we walked back along the water to grab some dinner and catch the 'L' back to the airport. It was time to head home. 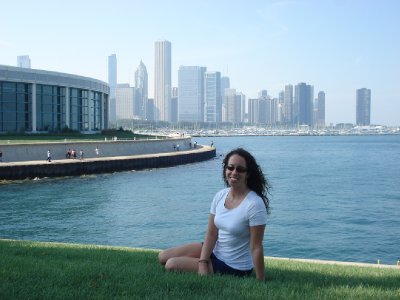 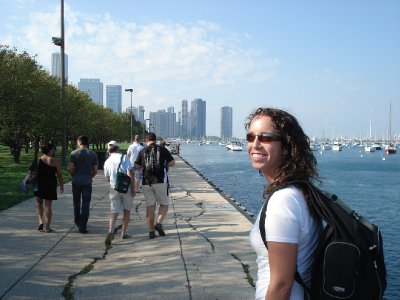