I'll give you the Tingles

After a 5 hour flight from Sydney we arrived at the Perth Airport (A). As usual, we weren't going to spend much time in Perth immediately, but rather hit the road and spend time in the city later. Our destination was the Nornalup National Forest on the south coast. After picking up our mighty Toyota Yaris, Dawn and I headed south to Walpole (B). 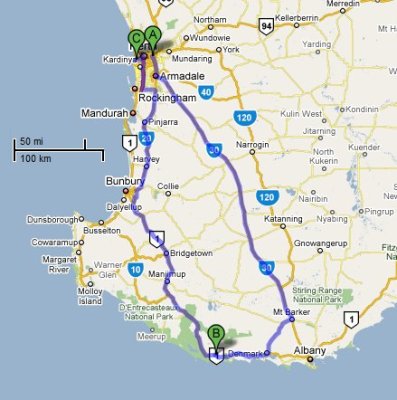 Our route took us away from the coast and through the countryside in Western Australia. Towns are few and far between, and when you do come across something marked on the map, it is usually not more than a gas station (and sometimes a pub). The unspoiled landscape was very pretty, and there was plenty of it. It was broiling outside, and Dawn made me roll up my window, threatening to strip naked if I didn't turn on the air conditioner. Keeping her clothes on, Dawn dutifully began looking for places to stop, but there were few turnoffs from the road and fewer attractions to break up our trip. The Toyota Yaris isn't exactly an offroad vehicle (think of a smaller Corolla without a trunk), but we were going to have to leave the paved highway to see the sights. We came across a sign indicating a lookout point, and headed up the offroad dirt path for a view of Western Australia. 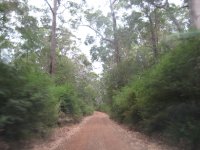 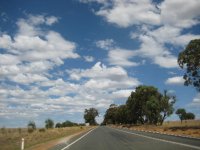 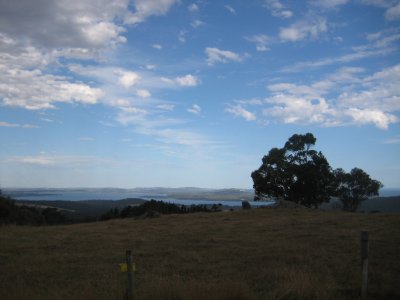 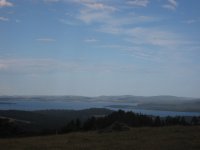 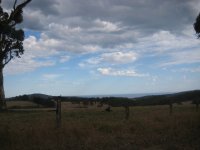 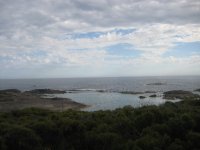 We arrived in Walpole in early evening and checked into our room. We had met a couple taking a break from the heat at one of the lookouts who recommended a hike to see a giant tingle tree. It sounded like something we could do before sundown and it would be a good preview of what we would see on the Treetop Walk. We drove back to the entrance to the Nornalup National Park and headed up the offroad tracks, once again going offroad in the Yaris. After driving through the heart of the park, we came to a sign indicating the path down to the giant tingle. It was astonishing. 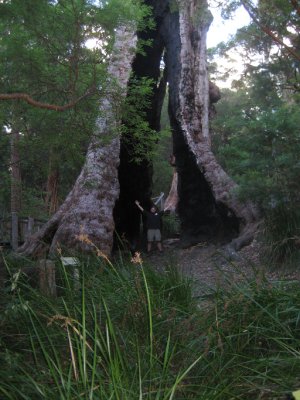 It was absolutely enormous, even larger than the giant trees we saw in Melbourne, bigger than any tree I had ever imagined. You could easily fit 40 people underneath this tree.

Tingles are the largest buttressing (where the base of the tree grows outward) tree in the world. The buttressing is due to a shallow and broad root system where most of the roots stay near the surface (and there is no taproot to secure the tree like in North American hardwoods). Only the layer of the tree immediately under the bark is alive, so the tree is able to survive even when fire, fungi, or insects cave out a cavity in the base. In fact, a major characteristic of the red tingle is the exposed cavity at the base of the tree, often caused by bushfires. You can see in the picture above how the inside of the tree is charred.

The large tingle we saw is about 300 years old, but the oldest tingles in the forest are nearly 400 years old. It is amazing how such an immense tree could be supported with a hollow base. What is even more amazing is that another giant tingle is only 20 feet away from this one! 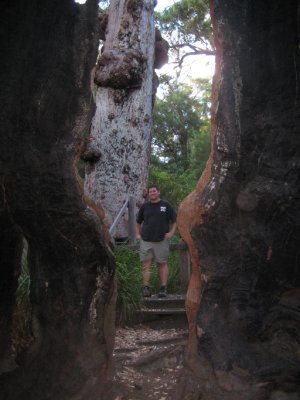 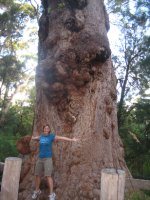 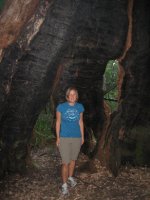 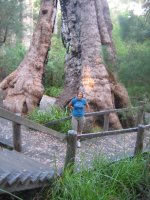 We made our way back to the car once the sun started going down. Wanting to get to the waterfront to watch the sunset, we exited the park and headed south to one of the points (not really sure where we were going). Speeding through the winding roads worrying that the sun would set before finding a viewing point, we stumbled upon a path down to a fishing spot on the edge of the water. We had made it just in time.

After watching the sun go down, we made our way back to get some sleep. Still on Sydney time (Perth is two hours behind) and after a long drive, I was ready for bed. We planned to get up and get an early start on the TreeTop Walk through the Valley of the Giants.

Our early start didn't quite go as planned since the TreeTop Walk didn't open until 9. We made a detour to go see the Circular Pool (a sign had been posted near the walk to the Giant Tingle). The stream feeding the pool was a brownish color and filled with frothy foam (the locals call it the Cappuccino Pool). The dark color comes from the breakdown of plant material against the rocks (which also causes the foam). We took a couple pictures, took in the scenery, and then took off as soon as it got close to 9. 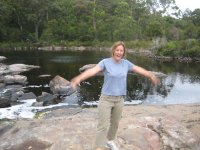 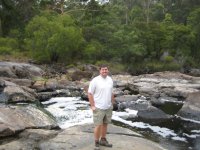 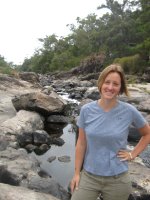 The Treetop Walk through the Valley of the Giants was built in 2002 to help protect the tingle trees. Tingle trees aren't widespread and are limited to the area around the national forest. Like I mentioned before, the tingles have a shallow root system which can be damaged just from walking around the trees. One of the most popular trees (and largest) actually fell over due to root damage. The boardwalks and treetop walks keep people's feet off the ground and away from the roots of the tingles. Anxious to see the trees eye to eye, Dawn and I practically ran to the start of the walk. 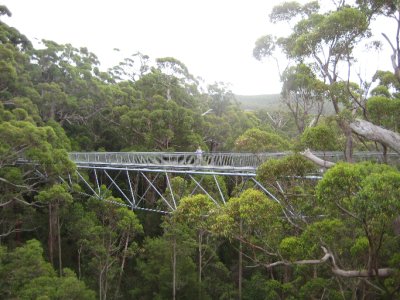 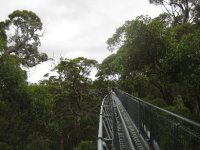 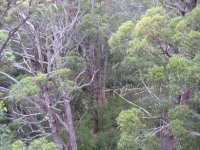 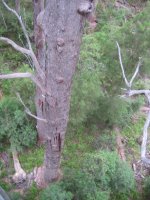 This walk is actually what convinced us to come to Perth. Bill Bryson, a humorous travel writer that wrote a book about traveling through Australia, spoke very highly of the walk. The walk is a series of trusses that lead you up to the treetops of the giant tingles, eventually reaching over 200 feet in the air. The walk is made to sway as walk through it, giving you the feel of moving with the branches as the wind blows. It sounds nice, but swaying in the wind 200 feet in the air makes your knees wobble and compels you to grab the railing tightly as you look down through the grate flooring. I also took every opportunity to jump up and down on the scaffolding while Dawn was in the middle of the trusses.

Even after seeing the size of the Giant Tingle the night before, I was amazed at the sheer size of the trees. The crowns of many of the trees had broken off during wind storms and showed new growth. Wind actually promotes the buttressing (the more the tree sways, the more the trunk spreads out for support), but it's hard to imagine such an immense tree swaying in the wind. The tops of the trees also supported many dead limbs caused by exposure to fire earlier in the trees life. Here is a video Dawn took towards the end of the walk. Listen for the distinctive call of the Australian raven, it's been the soundtrack for my trip in Australia (it makes an arrr, arrr, arrrrrrrrrrrrr sound that sounds like a diseased cat).

After completing the TreeTop Walk, we made our way to the second walk through the tingles, this one being on the ground. Being on the ground didn't make the tingles any less impressive, rather after seeing them from above made you appreciate just how big these trees really are. We were able to walk through more trunk cavities and snap a few more pictures. On some of the tingle trees you may notice large bumps (especially in the pictures above). These growths are actually the tree's defense to viral infections and are prized by furniture makers for their irregular grain. 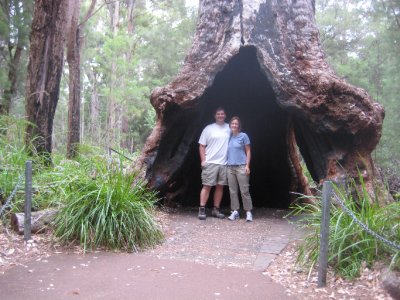 We left the Valley of the Giants and began making our way back to Perth. We decided to travel the long way through the wine country and see some of the scenery closer to the coast. Around lunchtime we stopped at a winery to sample the local wine and grab a quick bite to eat. It occurred to me that doing a wine tasting is not the best thing to do on a road trip, but I told myself that I would only have one glass. Dawn sampled each of the wines offered by the winery (Lost Lake), and I sampled the reds. The featured wine was a honey merlot, served chilled over ice. The honey merlot was not sweet as I had expected, but rather very smooth and refreshing (especially on a hot day). We each ordered a glass (and of course each got suckered into buying a bottle of wine), and settled into the patio for lunch. The view was beautiful as we looked over the vineyards and two horses sunning next to a crystal-blue pond. 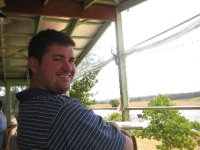 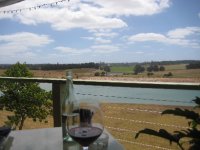 We stayed at the winery way longer than anticipated, but it was so peaceful and relaxing we had to drag ourselves away. Dawn slipped into a wine induced nap, and I tore up the highway to make it back to Perth before sunset. I had booked a place on the beach so that we could see the sun go down over the Indian Ocean. Living on the east coast, I have seen the sun rise over the ocean, but had never seen it set. Several hours later we reached the outskirts of Perth and began making our way to the coast. I took a detour to go through the heart of Perth to get a feel for the city. The city of Perth is beautiful, it's skyline sitting on the Swan River. It was a larger city than I had anticipated, but didn't seem too large (reminded me of Charlotte). I almost felt disappointed we didn't have more time to spend walking through the city.

Arriving just before sunset, we hurriedly checked into our room to make it out onto the beach. Dawn and I dipped our feet in the ocean and staked out a warm spot in the sand to watch the sunset. Kite surfers and wind surfers were acrobatically riding the waves. It was high tide and the waves looked pretty rough, but a man attempted to ride a boogie board into the surf with the aid of flippers (he gave up shortly after repeatedly being thrown back to the shore). After watching the sun set, we picked up a pizza and some Swan Draught and called it a night. Tomorrow we are headed to the desert to see the Pinnacles. 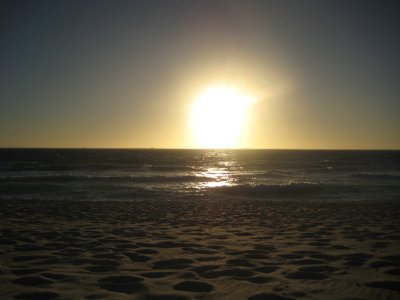 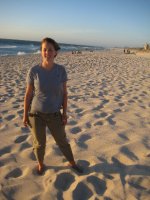 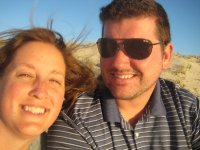