I'm visiting the final state in the South to see the 42nd President of the U.S. and to try and find a razorback. I'm off to Arkansas! 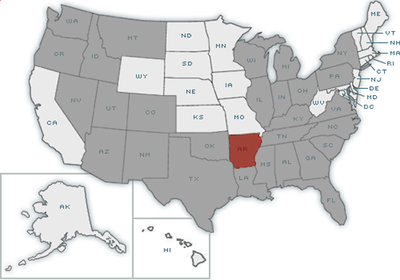 Upon arriving in Little Rock, Jason and I started exploring the city at the "little rock." The city was named for a small rock outcropping that served as a landmark while traveling up the Arkansas river and was commonly used as a crossing point to get over the river. "Little rock" wasn't really anything to see, but there was a nice waterfront trail that led to some informative signs about the city. While I read the signs, Jason studied the Native American carvings. 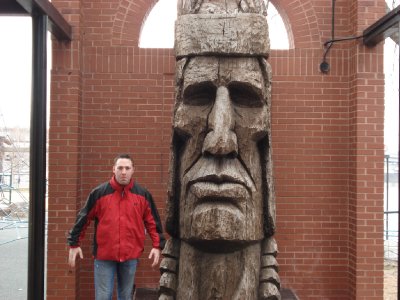 The waterfront tourist signs and statues were only able to keep our attention briefly, another sign had caught our eye. We saw our first sign of a razorback in the area! The trail took us over the river which offered a nice view of downtown (you can see some of the hotels, like the brick Peabody, and a couple of the taller buildings). 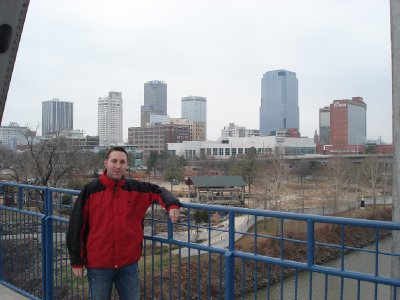 After crossing the river into North Little Rock, it didn't take long for us to find the razorback. It was huge! In fact, it was over 300 ft long and weighed over 1,500 tons! As you probably guessed, this wasn't the same razorback as the University of Arkansas mascot. In fact, this razorback wasn't even alive. This razorback was the USS Razorback, a submarine built and deployed in the Pacific during World War II. Despite finding its final resting place in Arkansas, the Razorback was named after a species of whale, not a hog. Before boarding the ship, Jason and I played with some of its weapons. 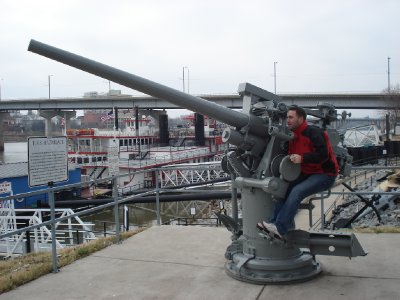 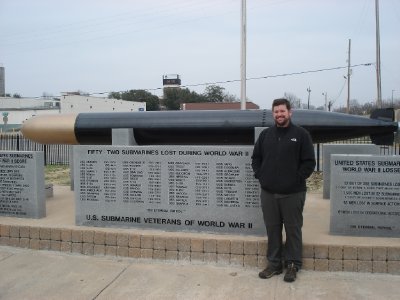 While I read the memorial for the submarine veterans, Jason sat in one of the deck guns and pretended to shoot enemy aircraft. Both of us were eager to head below deck. 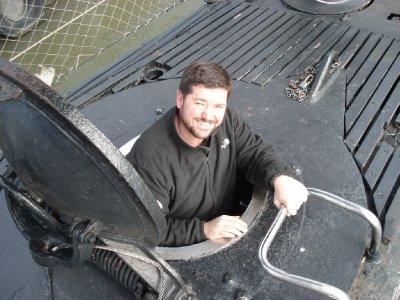 It was tight moving around in the sub. The ceilings were low and had plenty of objects that could knock your head. The first room we entered was the very rear of the ship which contained bunks and torpedoes. Our guide told us that the bunks always had someone sleeping in them (as soon as someone woke up, they switched places with someone on a different shift). Some of the bunks were under the torpedoes, only allowing about 8 inches of space. I couldn't imagine sleeping pressed against a torpedo as the ship bounced through the water!

Moving from section to section, we had to crawl through the bulkheads (yet another place you could bump your head). The next section we entered contained the controls for steering the submarine. It would be weird to have to drive a ship like this without being able to see (the periscope was in a totally different section of the boat!). There was only 8 people in our tour group, and we barely fit into any space. The typical crew was 80 sailors, but they could have up to 145 on the boat! 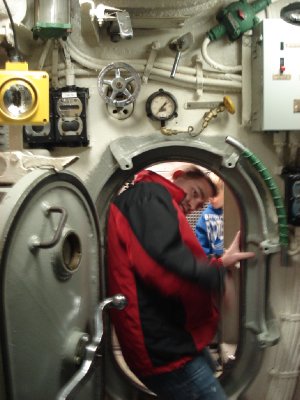 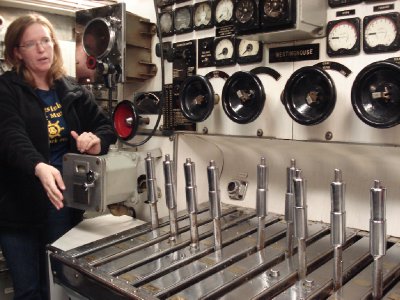 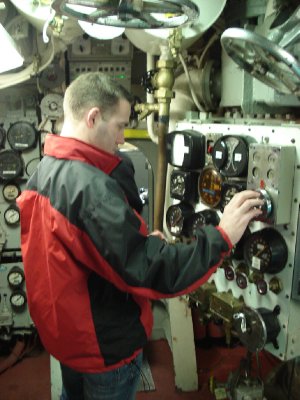 You may have noticed that the controls and signs in the sub are in a foreign language. In 1970 the sub was sold to Turkey, who then used it for another 30 years.

We kept moving forward in the boat, passing the engineering room with the engines (which you can kind of see in the back of the picture of the guide). The sub was diesel powered, which meant that it had to stay near the surface to supply the engines with fresh air. The ship also contained tons and tons of lead batteries to power its systems when it went into a deep dive. Let me put this into perspective, as a sailor you slept in a room with 20 other guys hanging 16 inches above and below you with 2 locomotive-size diesel engines producing deafening noise, running in a metal tube that captured leaking exhaust, producing copious amounts of heat, and are sitting on top of tons of lead batteries. Oh, and everyone is smoking to pass the time. Who is ready to serve on a submarine? 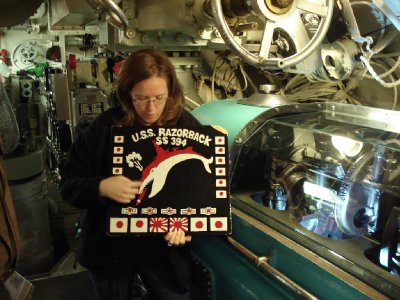 The guide is holding the emblem of the submarine that contained its kill record and rescue record (I forget how to actually interpret the symbols). We moved out of engineering and onto the bridge. We could look out of the periscope, look at maps, and see the communication equipment. There still wasn't much space, but it looked like a much better work environment than engineering. After walking through another set of bunks we entered the kitchen. 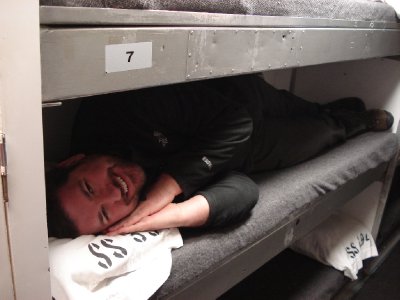 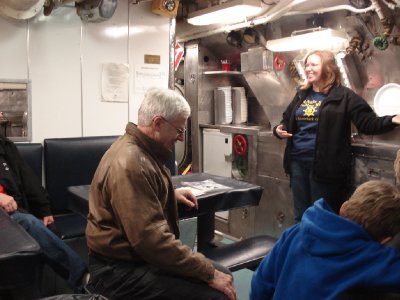 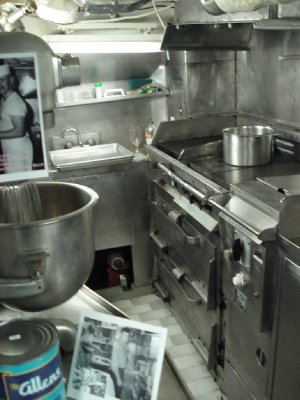 The best part of living on the sub was the food. Two full time cooks were on staff and cooked nearly all day. The sailors ate very well, and rotated in and out of the small kitchen. There were pictures of the crew in the kitchen, and again I was surprised at the number of people smoking. You would think that fresh air would be at a premium on the boat, especially in the kitchen. We left the kitchen and walked through the captain's quarters and finally into the front torpedo section. This section was similar to the rear torpedo section, except the front had twice as many torpedoes and launching tubes. 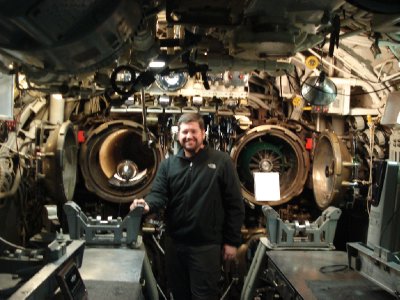 We left the sub and gulped down the fresh air. I had only been on the sub for about an hour, but it felt great to be back above deck. Jason and I had casually decided to take the tour, but it ended up being an incredible experience (granted we are two engineers that enjoy learning about this stuff).

Leaving the sub at the edge of the river, we walked back across the bridge to checkout the rest of downtown. The downtown area was easily walkable, and a lot of people were moving around (I think due to the boat show in the convention center). Several bars and restaurants lined the main drag, but our next destination was the Old State House Museum. 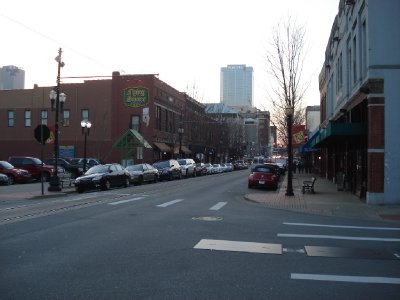 The museum was interesting and had a lot of information about the people who settled in the area. Several exhibits explored the civil rights and how the Civil War affected the area. The most interesting exhibits had a lot of artifacts from the Civil War. The exhibit also detailed the veterans of the civil war, and how Little Rock hosted some type of Confederate Convention in the mid 20th century. Firstly, I was shocked that cities still held conventions for the Civil War 70 years after it ended (there were pictures of how the town went all out for the event). Secondly, I was astounded that still living veterans attending these events! The last Civil War veteran died in the 1950s. The last widow of a Civil War vet died in 2004! 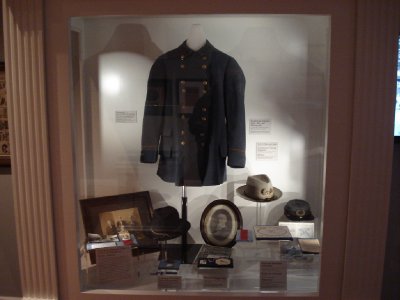 We left the museum and headed to grab a bite to eat. We passed the Peabody just before the traditional March of the Ducks and decided to "duck" in and watch. I had seen the ducks at the Memphis Peabody hotel, but Jason had never experienced it before. And you haven't lived until you see a herd of people stand around to watch ducks ride an elevator! 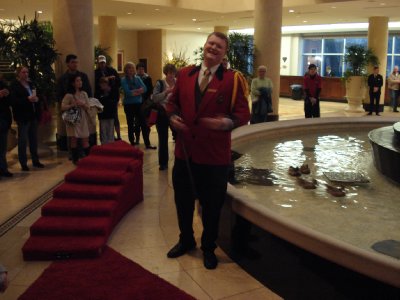 For those that don't know, the Peabody hotel keeps several live ducks in the fountain in its lobby. Every morning the ducks come down from their rooftop enclosure via the elevator and jump in the fountain. Every evening, the ducks do this in the reverse. Each "march" brings in a crowd of people. A PA announcement came over the hotel speakers letting us know the marching of the ducks was getting ready to begin. The "duck conductor" gave us a well rehearsed speech on the history of the duck march, and then coerced the ducks to walk the red carpet to the elevator.

So far I had learned that Arkansawyers seem to enjoy mentioning the Razorbacks at every opportunity, holding festivals to celebrate the Confederacy history, and watching ducks. But we hadn't seen or heard much of their favorite son, Ex-governor and US President Bill Clinton, until now. 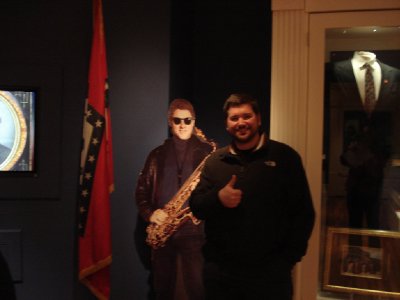 Jason and I decided to get a quick view of the rest of downtown by riding the tram. The tram pretty much retraced the areas we had already been, but it was nice to get off our feet for a little bit. The best part of the ride was talking to the tram conductor. He was a true ambassador to Arkansas, discussing policies of Walmart (which is headquartered in Arkansas), mentioned the Razorbacks, tried to convince that we should always buy "Made In America" products, and talked about Bill Clinton at length. Despite a staunch republican, this tram conductor spoke of Clinton as if he could turn lead to gold. For the rest of our time in Arkansas, this would be a reoccurring theme. Here is a picture of our tram going over the river with downtown in the background. 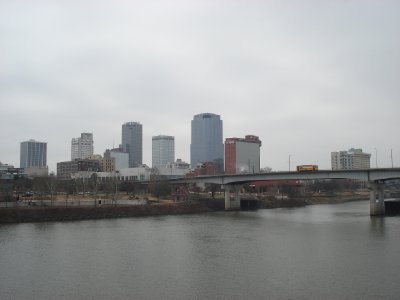 That night, each bar seemed to have some reference to Bill Clinton. We also happened to catch our second razorback sighting. 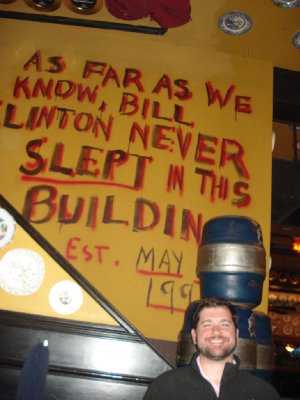 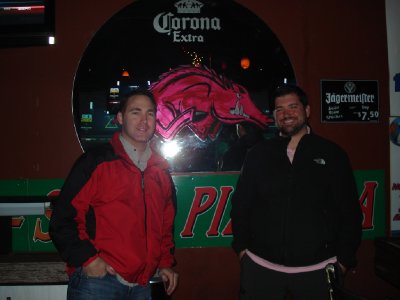 The next morning we set off to the William J. Clinton Presidential Library (which was really just a museum to all things Bill Clinton). The bottom floor had display after display demonstrating Clinton's successes in gun protection, job creation, balancing the budget, etc. The displays were very nicely done, but each made it seem like our nation was on the verge of collapsing before he took the top office. And not a single display mentioned Monica Lewinsky or his impeachment. We moved on to some of the other floors to escape the Clinton dogma. 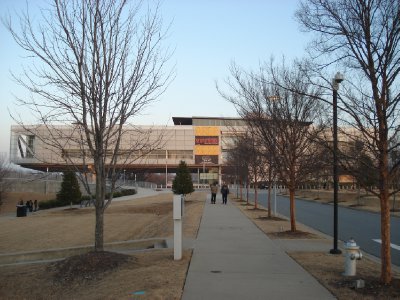 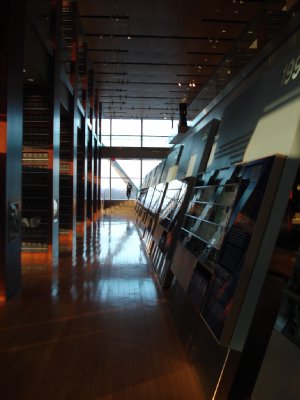 The next floor described the life of Clinton. Clinton's childhood and college years were pretty inspiring. Clinton was portrayed as always having an interest in politics and being active in the community while still finding time to follow his passion of music. A picture of Hilary and Bill in college was particularly amusing, Bill was sporting a full beard and shaggy hair while Hilary had on "John Lennon" sunglasses. Here is a picture of Bill in high school in his band uniform and one of him with the Razorback pig call. 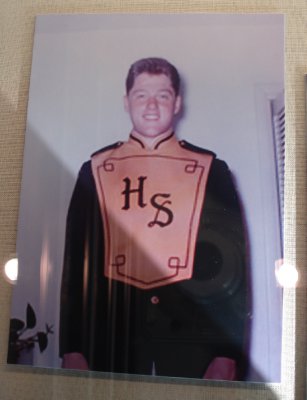 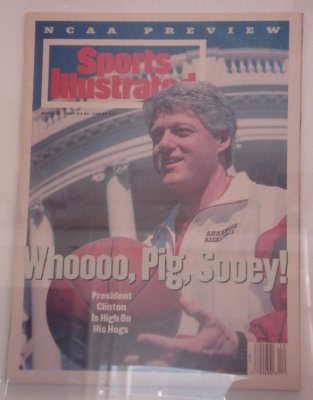 The top floor of the museum was the most interesting. The top floor contained a gallery of all the gifts Bill Clinton received from countries around the world when he was president. Some of the things were just bizarre. The coolest rooms were the recreation of the Oval Office when Clinton occupied it and the Cabinet Room. Each president can decorate the Oval Office however they see fit, and most put knick-knacks or items of personal significance in the room. Clinton displayed busts of the presidents that he particularly admired and a collection of pins from across the 50 states. 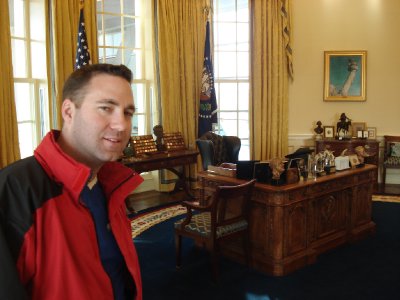 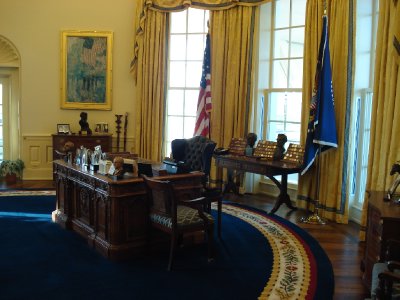 The recreation of the room is exact, down to the carpet and the presidential seal on the ceiling. 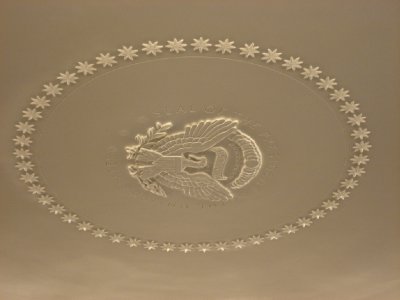 The cabinet room allowed us to see where each member of the cabinet sat during their meetings. I took a picture in the Commander in Chief's chair! 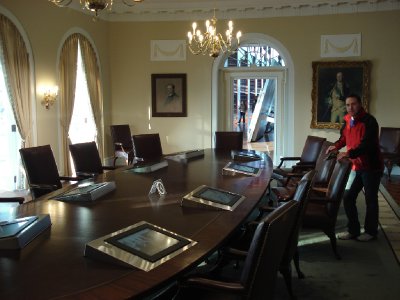 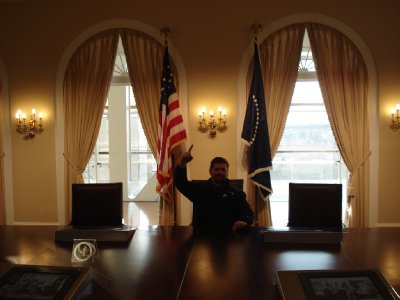 Our Little Rock trip was a success. We saw a Razorback, we learned something new about Arkansas, and we got to know our 42nd President on a more personal level. We are leaving the city now and heading to the Hot Springs for some rest and relaxation!