After seeing Lake Michigan while walking around Chicago and drinking beer in Milwaukee, I was eager to see my second Great Lake, Lake Erie! Megan and I are off to Cleveland! 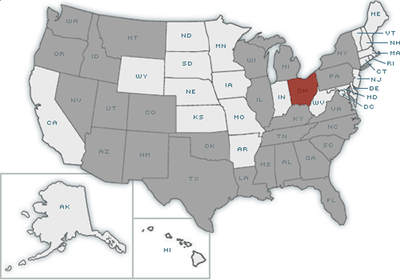 I kept going to Cleveland a secret. My family in Cincinnati and friends in Pittsburgh would give me grief about making a special trip to see Cleveland. Cincinnatians and Pittsburghers see little reason to visit Cleveland, whether the reason comes from basic city pride or from their hatred of rival sports teams. Personally, it felt weird that I lived in Ohio and still return to the state multiple times a year, but had never ventured outside the southwest corner of the state where Cincinnati is located. It was time to see whether all the anti-Cleveland bias was warranted.

Being wintertime, it was dark as we drove into the city. I was surprised that Cleveland didn't have a larger skyline, it seemed like only a couple of tall buildings stood by themselves. The traffic was light, and it wasn't too difficult to find street parking downtown. For several years now, Flintosh, my next door neighbor, has tasked me with transporting beer from a Cleveland brewery (purchased in Pittsburgh) back to Raleigh. Great Lakes Brewing Company makes a seasonal Christmas Ale, a strong and spicy beer that is absolutely delicious. Our first stop was the Great Lakes Brewing Company for a couple of pints. 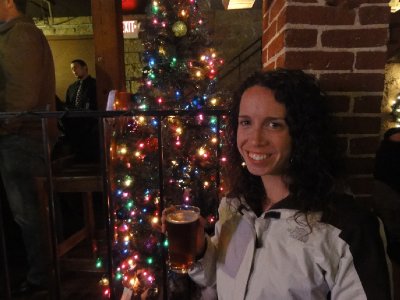 We arrived just in time to watch Indiana take on top ranked Kentucky, and it is hard to beat drinking beer while watching college basketball. The bar was lively, and soon it was standing room only. After sampling several of the brewery's beers, we had to leave to meet our "host" for the evening.

One of the challenges Megan and I face when traveling is getting the "authentic experience". I read the entries on WikiTravel and other people's travel blogs, I do research on TripAdvisor, and sometimes I can find relevant articles in my travel magazines. I like museums, but only when they talk about topics unique to the city or state. I steer clear of touristy destinations, like shopping or high-scale dining, or even worse, the dreaded tourist trap. I want to experience the city like a resident does; local food, local beer, and local activities. On this trip, Megan and I are trying something totally new—Couch Surfing.

The idea behind couch surfing is that you connect with a local resident by sleeping on their couch (or extra bed if they have one). Your host can help you plan activities or take you around town if they are available. You don't have to sleep on someone's couch to get travel tips, as CouchSurfing.org offers forums and groups to gain extra information. Megan was not sold on the idea of staying in a stranger's house, but she agreed to at least try it out.

Our host wanted to meet us at a local favorite in Cleveland, Melt Bar & Grill. Upon arriving at the restaurant, we met James and waited for a table to become available. I had pleaded with Megan to act cool and stop freaking out, and I could see her start to settle down once she had met James. The beers consumed at the brewery were starting to catch up with my bladder, and I had to visit the little men's room. Upon my return, I learned that I left Megan alone too soon. She confessed immediately, "I blew it! I told James I was glad he wasn't a serial killer!"

As you can see, James is a really just a nice guy willing to take time on a Saturday night to hang out with travelers to his city. Melt was an awesome suggestion, as everything on their menu is a variation of a grilled cheese. Megan opted for the mac-n-cheese grilled cheese (shown below), while I got the massive Italian with 5 kinds of meat. 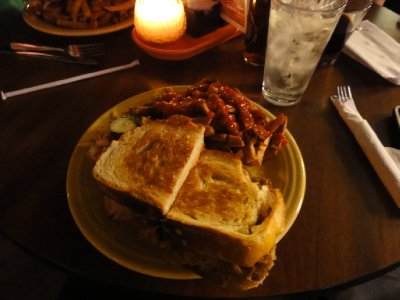 We hung for a while at the restaurant before heading back to James's place. We crashed, woke up, said goodbye to our (non serial killer) host and went downtown to finally see Lake Erie! 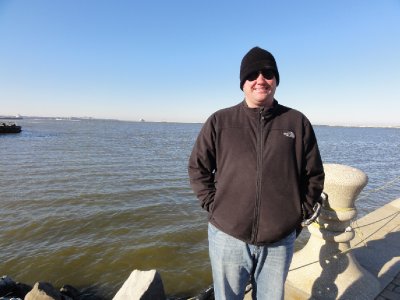 We walked along the waterfront to see the Cleveland Browns Stadium and the Rock-n-Roll hall of fame (check out Megan rocking out in front of the museum). 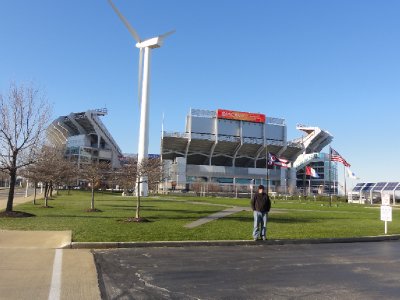 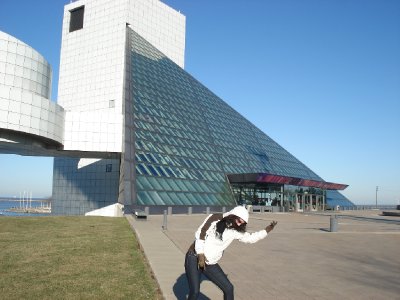 I guess now I can say that I have been to Cleveland, and the experience was better than I expected (although I'll admit that my expectations for Cleveland were set pretty low). Megan and I toyed with the idea of checking out some of the other sights around the city, but decided we'd rather move on to Columbus and check out Ohio's capital (yet another city in Ohio that I had never visited). So long Cleveland, don't tell my friends and family I was here!