Grits, Hank Williams, Rosa Parks, fried chicken, and Martin Luther King Jr can all be found in my next destination. I'm heading into the Deep South to visit Montgomery, Alabama! 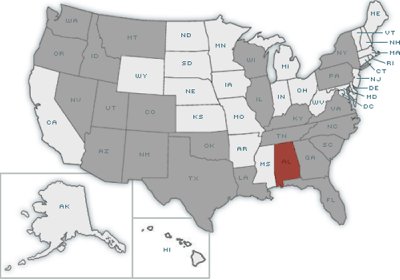 As Megan and I rolled into Montgomery, it looked like it was about to rain (and the humidity was so thick you could cut it with a knife). I hoped it wouldn't rain, because our plan was to walk through downtown to see the sights. Montgomery has played a role in some of the most significant events in our nation's history. Jefferson Davis took the oath of office here when Montgomery served as the capital of the Confederate States of America at the beginning of the civil war. 75 years later another leader, Martin Luther King Jr., rose up to fight against unfair practices and violence against African-Americans in the Civil Rights Movement. There was a ton to see, and we only had one rain jacket between the two of us.

We parked the car near the Alabama River and started to walk into town. The Montgomery Riverwalk was supposed to be a nice area to walk around, but with the rain looming overhead, Megan and I decided to head into town and start with a museum. 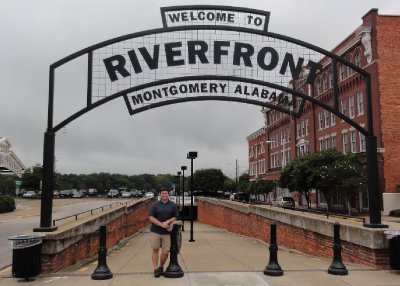 Hank Williams got his start in Montgomery, and one of the largest collections of Hank Williams memorabilia can be found here. Neither Megan nor I are a huge fan, so we hadn't planned on stopping by the Hank Williams Museum while in town, but it was hard to miss when walking away from the Riverwalk. 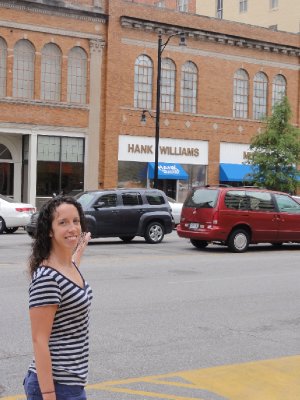 One of the celebrities we were here to see was Rosa Parks. Rosa Parks is one of the icons of the Civil Rights Movement, who after a day of work claimed she was too tired to move out of her seat when ordered to do so by the bus driver. She wasn't physically tired, but "tired of being treated like a second class citizen."

Megan and I walked to Court Square, the "Historic Heart of Montgomery". Originally serving as the junction between the two rival towns, New Philadelphia and Alabama Town, that merged together when the capital moved to Montgomery, Court Square has been the scene for many moments on the Civil Rights front. Slaves, freshly shipped up the Alabama river, were sold next to livestock in the middle of the square. In 1866, Court Square was the first place that Alabamians could witness the signing of the Emancipation Proclamation (over 3 years after Lincoln had originally issued the order). On December 1, 1955, another historic event took place, Rosa Parks boarded a bus. 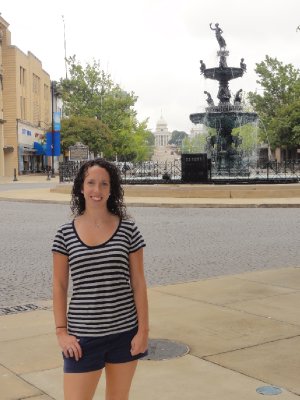 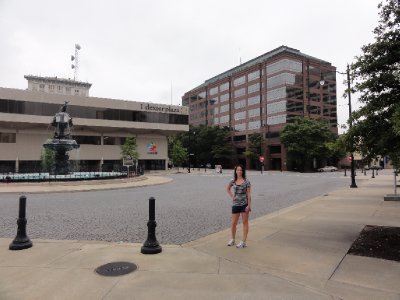 Megan is standing at the current stop for the bus route that Rosa Parks was riding. Rosa Parks only rode the bus for a couple blocks before she was arrested. Megan and I walked along this route to the Rosa Parks Museum, located at the site where Rosa Parks exited the bus under arrest. On the side of the museum there was a picture commemorating the event. Megan thought the guy's face behind Rosa Parks was interesting (and slightly odd), as he seemed to be saying "lady, you're about to be in BIIIIG trouble!" 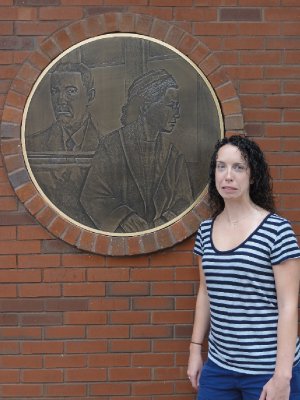 We went into the museum to take a look around. A lady at the front desk claimed they weren't ready to accept the entrance fee (despite it being 20 minutes since the museum was supposed to open). She offered for Megan and me to take a look around and she would come grab us once the payment system was up and running. We wandered into the museum and entered an art gallery. To my surprise, there was nothing about the Civil Right Movement, just art exhibits. Not wanting to pay to see a tiny art gallery, I pulled Megan out the back emergency exit in the museum before the curator could track us down.

We walked back through Court Square, past the fountain, and further through downtown towards the Capital Building. Montgomery has a weird vibe to it. First of all, we were the ONLY people walking around. It was just before noon on a Friday morning, you'd expect to see someone walking around. Only a handful of cars passed us, one nearly running us over (I guess the driver wasn't used to people actually using the crosswalk). Most of the buildings downtown looked older, but then extravagant buildings with fountains, waterfalls, and pools mixed in between the older structures. Our next destination was the Civil Rights Memorial, one of the modern structures located downtown. 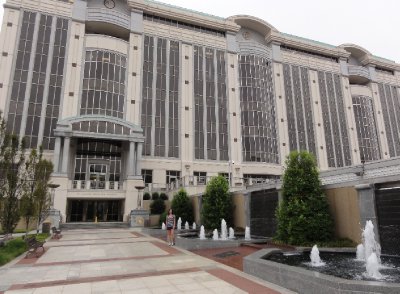 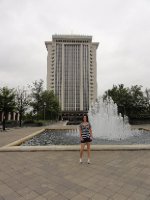 It took us a while to find the entrance to the Civil Rights Memorial Center. As we circled the block trying to follow a basic map, a security guard definitely started following us, staying just far enough away that we couldn't ask for directions. On the second loop around the block, we found the entrance hidden behind a construction tarp. Upon entering, Megan and I had to pass through a metal detector and empty our pockets to be wanded by another security guard. The Memorial Center wasn't a very large place, but it was incredibly moving.

The first room of the center had a series of plaques describing 40 different men and women (some black and some white) that had lost their lives in the Civil Right Movement. Their stories ranged from being victims of random acts of violence, from giving a black man a ride in their car, to being an active member in the NCAAP. You could look through a simulated telescope to see the scenes of the Civil Rights Movement located within 4 blocks of the Memorial Center. A set of phones played commentary on each of the people remembered. 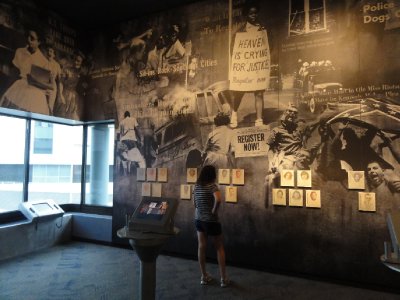 We left the first room to watch a 20 minute video on the Civil Rights Movement. We had studied Civil Rights in school in various US History classes and during Black History Month, but the images presented in the video had a deeper impact. Perhaps it was the fact that I was seeing these images outside the sterile and safe environment of the school and in the location where they actually took place, or perhaps it was because I had just read the tragic story of 40 people who had died. I think the real reason is I no longer view 1965 as ancient history (30 years ago seems like an eternity to a 10 year old). Both of my parents were in school when these events were taking place. My grandparents were in their 30s, certainly aware of the events that were going on. How could people in my grandparents' day think that segregation could be fair? How could the creation of laws to prevent blacks and poor people from voting be passed? These events didn't just happen in Alabama, but all across the country. In North Carolina, laws passed in 1900 prevented nearly 100% of blacks from voting. It took until 1964 for a constitutional amendment to be added to ban these types of laws.

The hallway outside the theater drove the message even further. Here were stories of additional acts of racism and unfair practices against other minorities. Some of the stories had happened since I was in college, stories like the random acts of violence against Middle Easterners after September 11th. Entering the final room, you were presented with a giant wall filled with changing names. This was the Wall of Tolerance, where people could pledge to do their part to end racial injustice. It was pretty moving to be able to take this minor stand after reading the stories presented in the rest of the museum. 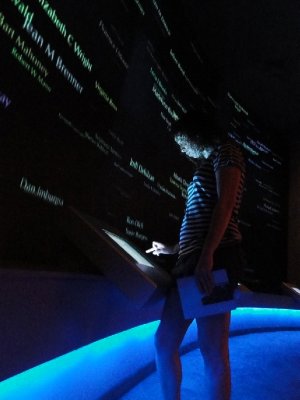 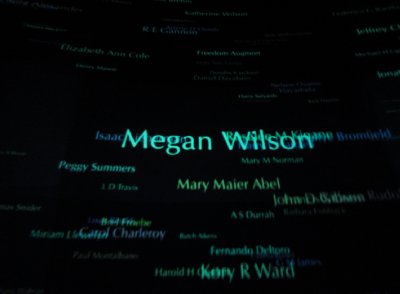 Unfortunately the memorial itself was undergoing some maintenance, so we couldn't see it completely. A round, polished marble monument, etched with the names of the 40 people, rotates as water cascades over the side. The wall in the background has a quote from Martin Luther King Jr, "...we will not be satisfied until justice rolls down like waters and righteousness like a mighty stream...". 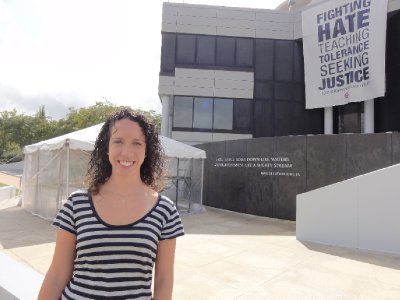 From the memorial we walked back to the main street running through town. On the corner was the church that Martin Luther King Jr had served as minister. They offered tours throughout the day, but the sun started to come out from behind the clouds, and we decided we wanted to see some more of the city. 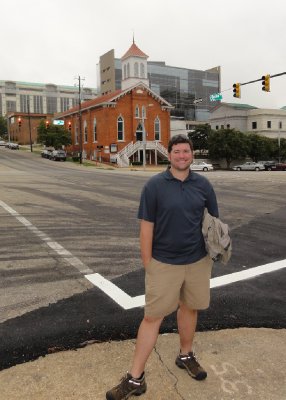 Across the street from the church, a giant memorial commemorated the inauguration of Jefferson Davis. Montgomery was the initial capital of the Confederate States of America until Virginia seceded several months later. 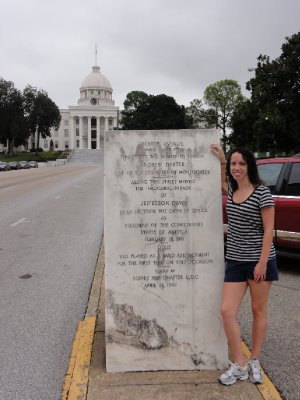 The grounds around the Capital Building were beautiful, especially after walking around with an overcast sky all morning. A giant map of Alabama stood out front of side, while flags of all the states were on the other. 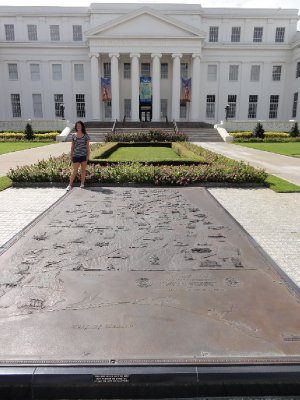 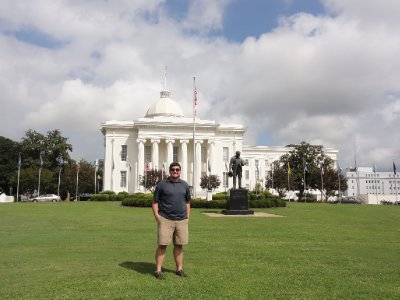 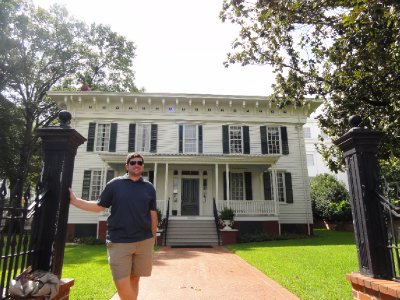 Upon leaving the Memorial Center, we had asked the guy at the front desk where we should get something to eat. He had two suggestions, either Chris' Hotdogs for a meal that had been in Montgomery for over 100 years, or go to a down-home southern kitchen. Both sounded great, so Megan suggested a hotdog appetizer before heading the the southern kitchen. 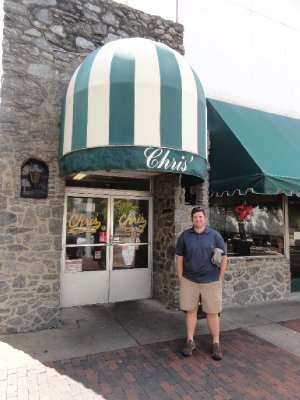 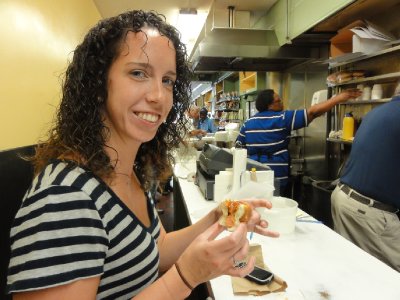 We crammed into Chris' to sit at the bar after ordering a single hotdog. It was good, but not too much different from your standard hotdog. The restaurant itself was the real experience. You could feel the history while sitting at the counter. There were still no people in the streets, but the restaurant had a consistent line of people ordering food. Seemingly every person ended their conversation behind the register with an emphatic "Roll Tide!" (referring to the cheer of the University of Alabama).

We walked back to the waterfront to pick up the car. With the beautiful weather (but not completely able to ignore our rumbling tummies), we wandered down to the river to take in the view. It was scenic, with a walkway and a concert pavilion off to the side of the dock. A steamer was tied up, waiting to take people out for a cruise later in the evening. 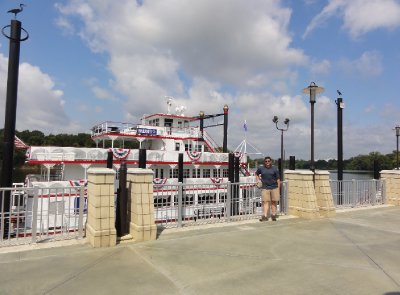 We hopped in the car and drove to the restaurant for an authentic Alabama meal. I ordered steak and gravy, with grits, corn bread, black-eyed peas, and rice. Megan ordered fried chicken, coleslaw, macaroni and cheese, and string beans. It was absolutely fantastic, and Alabama held up to the saying "If it ain't fried, it ain't from the South". 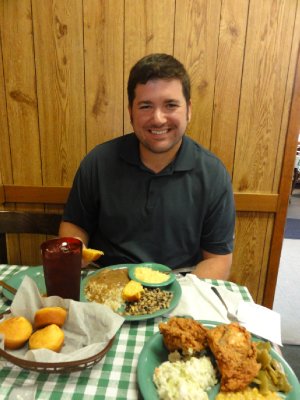 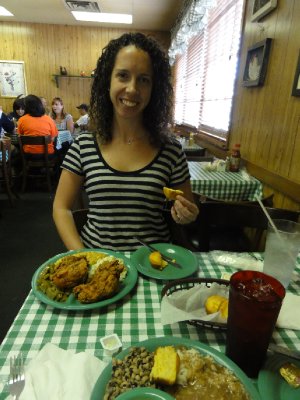 Despite the rough memories of the events of the Civil Rights Movement, Montgomery was a nice city filled with Southern pride. The people were friendly, and the food was phenomenal. If was time to leave, however, and head to the neighboring Mississippi. 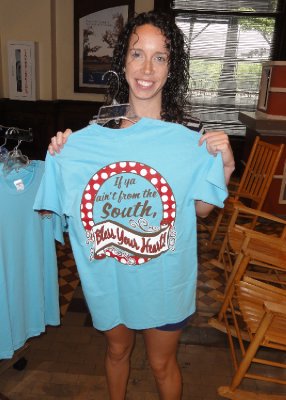